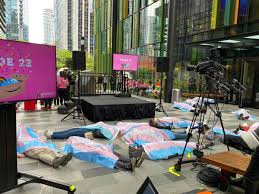 Online retail giant Amazon has restricted search results related to LGBT people and issues on its website in the United Arab Emirates, UAE.

The firm took the step after reportedly coming under pressure from authorities in the Gulf state.

“Same-sex sexual relations are illegal in the UAE.” Expressing support for LGBT rights could also be deemed an offence.

The news comes as Pride month, which is dedicated to celebrating LGBT people around the world, comes to a close.

“As a company, we remain committed to diversity, equity and inclusion, and we believe that the rights of LGBTQ+ people must be protected,” an Amazon spokesperson said.

“With Amazon stores around the world, we must also comply with the local laws and regulations of the countries in which we operate,” they added.

The company made the decision to restrict the searches after being threatened with penalties by the UAE government, according to the New York Times, which first reported the story.

The UAE embassy in Washington did not immediately respond to a request for comment. Reports said

Earlier this month, the Kuwait foreign ministry said it had summoned a top US diplomat in protest over tweets from the American embassy supporting LGBT rights.

US officials there had posted a rainbow flag and message of solidarity from President Joe Biden for Pride month.

Rights for LGBT people are severely restricted in Kuwait and it is “illegal there for men to be gay.”

An Al-Ekhbariya report showed commerce ministry officials ‘removing a range of items from shops’ in the capital Riyadh.

Oil prices expected to stay above $100 per barrel