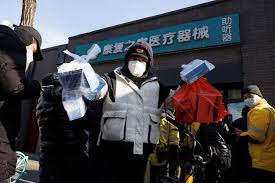 As many Chinese embraced new freedoms on Thursday after the country dropped key parts of its tough zero-COVID regime, there was mounting concern that a virus, which had largely been kept in check, could soon run wild.

Three years into the pandemic, many in China had been itching for Beijing to start to “align its rigid virus prevention measures with the rest of the world,” which has largely opened up in an effort to live with the disease.

Those frustrations boiled over into widespread protests last month, the biggest show of ‘public discontent’ since President Xi Jinping came to power in 2012.

Without saying it was a response to those protests, some cities and regions began relaxing COVID controls, in moves that heralded a nationwide loosening of the rules unveiled by the National Health Commission on Wednesday.

The NHC said “infected people with mild symptoms can now quarantine at home and it dropped the need for testing and health status checks ” on mobile apps for a variety of activities including travelling around the country.

Domestic ticket sales for tourist and leisure spots have soared, according to state press, while some people took to social media to reveal they had tested positive for the virus – something that had previously carried heavy stigma in China.

“I know COVID is not so ‘horrifying’ now, but it is still contagious and will hurt,” said one post on the Weibo platform. “The fear brought to our heart cannot be easily dissipated.”

“Too many positives!” said another Weibo user.

China reported 21,439 new local COVID-19 infections on Dec. 7, down slightly from the previous day and below a peak of 40,052 cases on Nov. 27. Cases have been trending lower recently as authorities across the country dropped testing requirements.