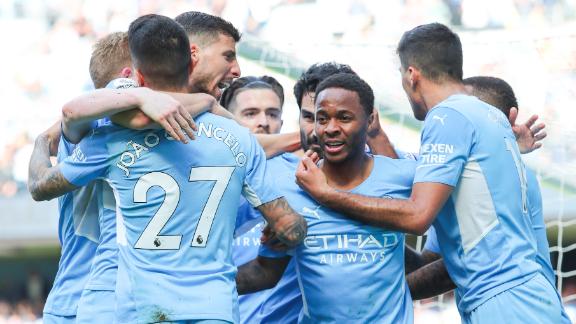 Manchester City can put one hand on the Premier League trophy on Sunday if they beat West Ham to extend their three-point lead over Liverpool at the top of the table.

The Reds are in FA Cup action as they face Chelsea at Wembley on Saturday, offering City the chance to stretch their advantage to six points and further boost a seven-goal lead on goal difference.

City have been in scintillating form since a 2-2 draw with Liverpool last month left the title race on a knife-edge.

Pep Guardiola’s men have struck 22 goals in five games since to close in on a fourth title in five seasons.

Another convincing win at the London Stadium and the title will be realistically won given City’s better goal difference.

Guardiola on Friday that “Everybody knows with winning at West Ham and it will be almost, almost done, with the goal difference…It’s absolutely a final.”

However, there are concerns for Guardiola in cobbling together a defence.

Ruben Dias, John Stones and Kyle Walker have been ruled out for the season, while Aymeric Laporte, Fernandinho and Nathan Ake are fitness doubts.

West Ham are also in need of the points in their bid to pip Manchester United to Europa League football next season.

David Moyes’ men trail sixth-placed United by three points but have a game in hand over the Red Devils.

Spurs are now just one point behind the Gunners and can leapfrog them with victory over Burnley on Sunday lunchtime.

Arsenal are not in action until Monday when they travel to Newcastle.

Spurs striker Harry Kane said; “It was important to win, of course. We play before them on Sunday, they play Monday night, so I feel like if we can win that, we obviously put a bit more pressure on them.

“I think I’d rather be going first than second, of course. But we still need to go out there and win. Otherwise it makes their job a lot easier.”

Arsenal boss Mikel Arteta was furious with the officiating at the Tottenham Hotspur Stadium as his side conceded a penalty and had Rob Holding sent off before half-time.

But there is little time for Arteta to lick his wounds if Arsenal are to avoid missing out on Champions League football for a sixth consecutive season.

Battle at the bottom
The result between Spurs and Burnley also has huge ramifications at the bottom of the table.

Leeds sit in the bottom three due to their much-inferior goal difference compared to Burnley with both sides two points behind Everton.

Should Leeds fail to halt a losing run at home to in-form Brighton, they could be virtually relegated this weekend.

“Our preparation as such is that we feel like we have to win the match,” said Leeds boss Jesse Marsch, who has been unable to kickstart a faltering season since the sacking of Marcelo Bielsa in February.

Everton’s form at Goodison Park has been the key to edging towards survival.

The Toffees have taken 10 points from the last 12 available at home, including victories over Manchester United and Chelsea.

Four points from home games against Brentford and Crystal Palace on Thursday would stave off the financial disaster of dropping into the Championship.

“We’re not done, we’re not over the line.

“The minute you switch off or you stop doing the good things you were doing this game can punish you, so we have to make sure we approach the games with the exact same attitude and try to pick up the results that we need,” Everton boss Frank Lampard said.