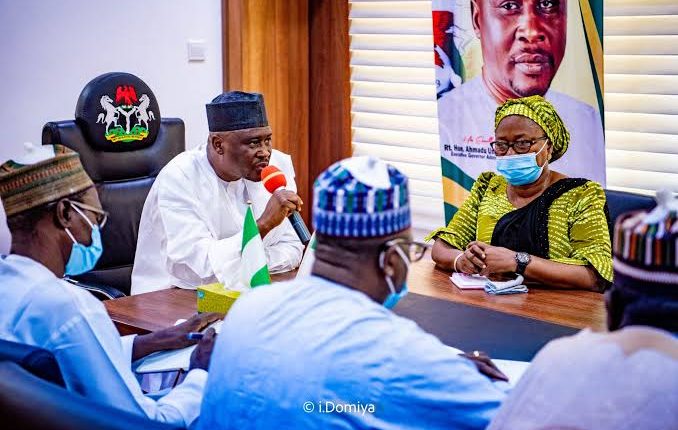 The Governor of Adamawa State, Amadu Fintiri has unveiled Professor Kaletapwa Farauta as his running mate for the 2023 Election in the state State.

The unveilling took place at the government house, Yola, the Adamawa State Capital

According to Governor Fintiri, the choosing of professor Kaletapwa was a milestone in his continuous journey towards the consolidation of the gains of the past three years.

‘‘We are at the point where we take stock and prepare for a fresh start as the 2023 election beckons. Part of the tradition for the renewal of this journey demands that I declare to contest and get nominated by my party. I have declared and my party – the Peoples’ Democratic Party (PDP) has through a transparent primary election, elected me as the candidate for the 2023 governorship election in the State.”

”Another statutory demand, is that I exercise my prerogative of nominating a running mate which I did. As I speak to you, our great party has submitted both my name and the running mate to the Independent Electoral Commission (INEC) for the election”. He added.

The unveiling by the People’s Democratic Party, is therefore a culmination of the side of the constitutional demand.

Governor Fintiri also revealed that when he came into power three years ago he met a State trapped in every definition of set back such as incessant conflict by the perennial farmer/herder crisis, communal clashes and insecurity imposed by the activities of terrorists .

Others includes dearth of infrastructure that defined the rural and urban centers; economic crunch, lack of prudent initiatives and poverty.

He said his government went all out to reverse the  trend.

”Even though the lockdown era slowed our speed, it was not weighty enough to derail us.When we remember the depths of the crisis we faced; the darkness we inherited, and the impact of COVID-19, the progress we are making is truly amazing”. The governor said

”Today, our people are more secured than they were in 2019. Our farmers and our herders are attending to their respective trades with minimal fear. Our people are more united and our communities are less suspicious of each other. Our children are in school enjoying free basic education with all the examination fees paid for, by the government”. The governor reemphasized.