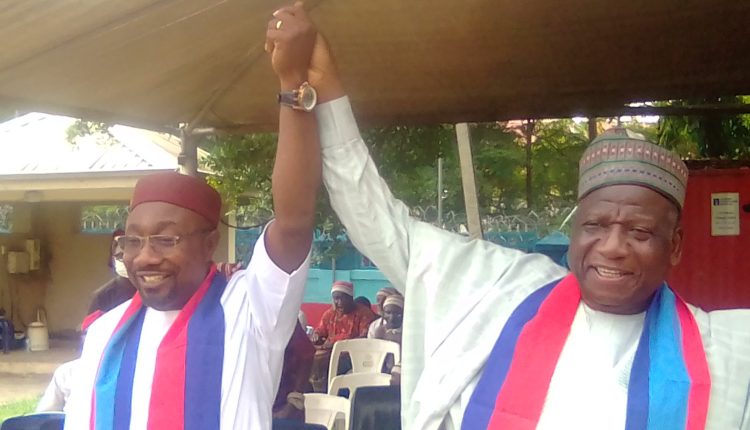 One of the opposition parties in Nigeria, the Action Democratic Party, ADP, has named Pastor Okey Udo, as its vice presidential candidate.

Unveiling his running mate, at the  party’s National Secretariat in Abuja, Nigeria’s Capital, the ADP presidential candidate, Mr Yabagi Sani, said the imminent political ascendency of his party in 2023 are crystal clear to everyone, “who is not afraid to engage in the exercise of correct and objective interpretation of all the empirical signs and indicators presently hanging overhead in the nation’s political horizon.”

Mr. Sani who is also the ADP National Chairman, said the choice of Pastor Okey Udo as his running mate was based on the desire to enhance prospects of the party at the 2023 general elections.

“From among the many eminently qualified members of the party, Pastor Okey Udo was unanimously chosen by all in the selection panel in recognition of his outstanding qualities which include, a track record of dedicated and selfless commitment to the party over the years.

“More than any other political platform, the Action Democratic Party, has become the greatest beneficiary of the anger and disenchantment with the APC, PDP catastrophe.

Nigerians have embraced the ADP because, they have seen in the party’s programmes, its activities and in the composition of the Parry’s leadership the promise of a new dawn,” he said.

“The ADP, is calling on the relevant security agencies to brace up to the challenge of monetary inducement of voters in all future elections, especially, the 2023 general election.

He added that “in the interim, the ADP is demanding that all persons reportedly arrested by operatives of the EFCC in Ekiti State gubernatorial election should be interrogated and brought to justice along with their sponsors and masterminds.”

Pastor Udo also said: “From the East to the West, from the South to the North and in every nooks and crannies of the country, Nigerians are craving and clamouring for a change in the character and textures of their political leadership.

“Weary and heavy laden, the people are groaning and seeking for salvation from the  agonies of unprecedented poverty and insecurity that have enveloped the nation under the reigns of the PDP and the APC from the beginning of the ongoing 4th Republic, twenty two years ago to date.

“The elections of 2023 is a watershed in the political trajectory of Nigeria because, our people will be having another opportunity of democratically taking their destiny in their hands  through the ballot box. By their decision, our compatriots will be charting a new course of history as well as, making a choice between advancement and retrogression.

” The ADP must be conspicuously and powerfully available as the Credible Alternative platform.