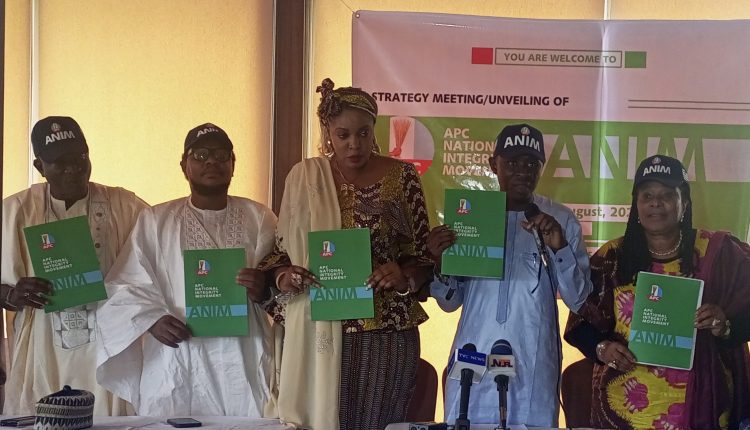 A group know as All Progressive Congress, APC, National Integrity Movement (ANIM) has called on all aggrieved members of the Party to shelve their sword and embrace the ongoing reconciliatory process and campaign vigorously for the party’s presidential candidacy, Tinibu/ Shettima ahead of the 2023 general election.

The National Leader of the APC National integrity Movement, Hon Abubakar Sadiq Saadu made the call while unveiling the group in Abuja Nigeria’s capital.

Hon Saadu explained that the group is out to develop a solid platform for all party loyalists and supporters who can come together and work towards the success of party candidates at all levels.

He added that their mission is also to build strong partnership, unity and understanding among party stakeholders across the country and identify means and measures of mobilising more people to support party candidates and create more political awareness among citizens based on the integrity of party’s flag bearers ahead of the general election.

He stated that the group will also identify party challenges and problems, provide mechanism that proffer solutions and best way to amicably resolve them at the party level.

The National Leader further revealed that the group will bring about a new paradigm shift that adopts a bottom-top approach capable of identifying, strengthening, showcasing, and reinforcing the role of party loyalists and supporters at all levels, and ensure everyone is carried  along for the success of the party and leaving no one behind in the process of party activities and engagements.

Saadu explained that the All Progressive Congress, APC, in the last seven and half years has brought a lot of reform and democracy to Nigerians and needed someone within the party that would consolidate in that direction.

Muslim-Muslim Ticket
Speaking on the Muslim-muslim ticket as adopted by the party, Saadu explained that what Nigerians should be more concerned with the dividends of democracy and not the issue of Muslim Muslim or Christian Christian ticket.

” Basically the issue is sincerely political… it does not border on religion. What we are after as a member of progressive family, is one how can we win election? How can we continue bringing the dividends of democracy to Nigeria?

“Talking about Muslim Muslim ticket is not going to have a problem.

” Let’s say the position of the Vice President is just there to represent Christians or is there any segment or divided responsibility that defined in the constitution of Nigeria that if you are a president and a Muslim, your only concern is to have to do with only Muslims?”.

Also speaking, a former Presidential Aspirant of the APC, Hon Adamu Garba while clarifying on the Muslim-muslim ticket said, “these are the guys that have a proven track record of delivery, of efficiency of commitment to bringing the best out of all their thought.

“Therefore what we should project is the competency and the capacity of these people to do the best for the country as opposed to just say, religious sentiments“, he added.

“Today as I’m talking to you go to Borno state. Just yesterday I was getting the statistic 70,000 Boko Haram group 70,000 People surrendered back into Nigeria.

“They are now surrendering and coming back as reformed citizens. Just two days ago or three days ago, 10 Chibok girls were released, but you hardly see these things as the breaking news on the media.

“So it means that we have subjugated the initial security challenges that came upon while campaigning. Now there’s a new dynamic of territories that come from the Northwestern and north central part of the country… and there are programs to push them back”.

“When you look at the momentum they came with in the first place. Up to now they are unable to hold an area where they can say they are governing unlike Boko Haram they held 14 local governments when we came to power.

” But now all these banditry are unable to control any area. It means that there is a serious push back and so many strategies are being ignited to make sure that they are pushed out of the system“, he pointed out.