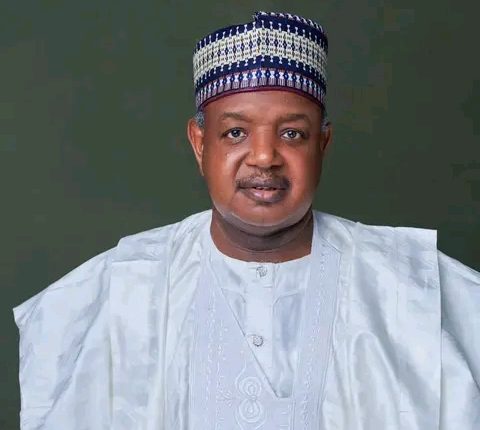 Earlier, the returning officer for the election from the National Secretariat of APC, Hon Kelechi Njoku, declared Governor Abubakar Atiku Bagudu as the winner of the Kebbi Central Senatorial seat primaries.

“As a Returning Officer, I hereby declare that His Excellency, Governor Bagudu, is the winner of the Kebbi Central senatorial primary election of the APC,’ he announced.

The returning officer further announced that Atiku Bagudu scored 445 votes cast by all the delegates, thereby clinching all the eight (8) Local Government Areas that made up Kebbi Central, while the incumbent Senator, Muhamadu Adamu Aliero, had no vote.

In his acceptance speech, Bagudu expressed delight that the ongoing exercise across Nigeria was peaceful, democratic, and transparent in the state.

He also happily recalled that Thursday’s APC Gubernatorial primary election in the state was also similarly peaceful, fair, and transparent.

In a statement by Bagudu’s Special Adviser on Media, Yahaya Sarki, Bagudu lauded the delegates for their humility, doggedness and understanding.

“I have accepted the nomination in good faith, and I will provide quality representation.

“This is a sequel to the request by the stakeholders of the party in the Constituency for me to contest the seat, penultimate week.

“They also did the same for the Minister of Justice and Attorney-General of the Federation, Abubakar Malami, SAN.

“We are both divinely reminded that power comes from the Almighty Allah.

“Little did we know the AGF will answer a higher call from our Father, President Muhammadu Buhari.

“For that reason, therefore, he did not present himself for the nomination,” he said.

Governor Bagudu also recalled winning a similar ticket in 2006 but had to relinquish it to Aliero because of the ANPP/PDP merger.

He said, “that was to accommodate Aliero, who had just joined the PDP and was given the ticket.

“We are for peace and the people, and we will never relent in doing this for posterity to remember us.”

Bagudu added that he would sustain Nigeria and the progressive trajectory.

He urged the members of the APC to continue to mobilise new members, as well as reconcile all aggrieved party faithfuls.

Bagudu commended the delegates, stakeholders, and members of the election committee from the National Secretariat of the APC, Abuja, security agencies, INEC and other media for ensuring the successful conduct of the exercise.

The Minister for Justice and Attorney General of the Federation, Abubakar Malami (SAN), also the State Chairman of the Election Committee for APC, Kebbi Central Senatorial Zone, commended the delegates for their orderliness and exhibiting the spirit of democracy throughout the conduct of the exercise.