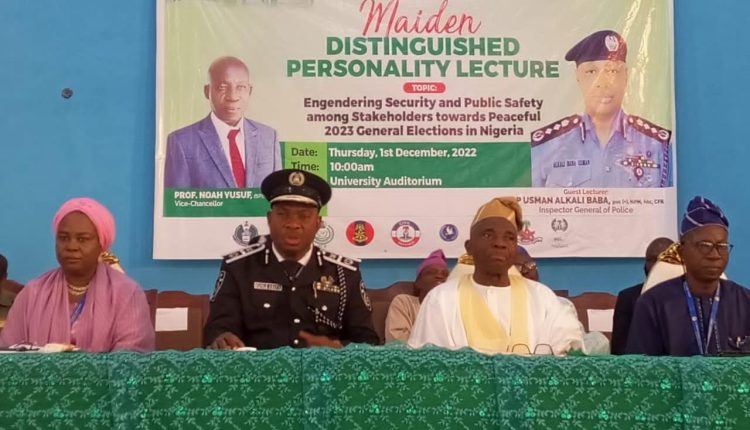 On Dec 1, 2022
0 630
Share
The Nigerian Police Force has warned  that none of its personnel deployed to man the inner rings of polling booths should be seen bearing lethal weapons during the 2023 general elections.
The Inspector General of Police, Usman Alkali Baba, who gave the warning in Ilorin while delivering the maiden distinguished personality lecture of Al-Hikmah University, Ilorin, said the affected police operatives could only wield batons.
The lecture was at the instance of the Centre for Peace and Security Studies of the faith-based varsity.
Speaking on the lecture with the topic “Engendering security and public safety among stakeholders towards peaceful 2023 general elections in Nigeria”, Baba said men of the police at political gatherings shall be limited to the maintenance of peace and order as well as enforcement of extant laws.
He said that officers posted to the venues of elections must be acquainted with procedures guiding the conduct of the exercise.
“All security personnel participating in the election should have the knowledge of procedurals at the election venues. That is classification of inner and outer rings respectively to serve as a guide in deployment.”
According to him, on no account should personnel deployed to the inner ring of the venue of the political events or voting centres/polling booths be seen with any lethal weapon, except baton.
He said the involvement of the Police at political gatherings should be limited to the maintenance of peace and order, and enforcement of extant laws.
The Police boss also instructed  that officers should at all times exercise maximum restraint while covering political gathering or deployed at voting/collation centres warning that they  should not at any time turn themselves into spectators but shall at all times be conscious of happenings around them, observe precautionary measures, personal and public safety while on duty.
“Police personnel shall use tact and persuasion to resolve issues when dealing with or confronted by agitated persons, avoid escalation where there is tension,” Baba said.
He disclosed that 10,000 policemen billed for passing out from Police Colleges nationwide at the end of this month would be deployed to augment the police strength already on ground for duties in the forthcoming general elections.
Baba, who spoke through the Assistant Inspector General of Police in charge of Zone 8 Headquarters, Lokoja, Ashafa Adekunle, vowed that the force would not tolerate acts that could jeopardize the peaceful conduct of the polls irrespective of whose ox is gored.
He said that police under his leadership had ensured that stakeholders in the elections conduct themselves within the ambit of the law.
The Inspector General of Police, who promised that the force would not be partisan in all ramifications of the polls, urged political parties to make their campaigns issue-based and avoid inciting violence before, during and after the elections.
The Vice-Chancellor, Al-Hikmah University, Ilorin, Professor Noah Yusuf, said threats to violence were becoming real daily, particularly since the floor was declared open for electioneering campaign, thus making many Nigerians and the international community to be scared and jittery.
He noted that individual and collective responsibilities for enhancing and supporting security efforts were paramount in the nation’s quest towards peaceful 2023 general elections.
The acting Director, Centre for Peace and Security Studies at the institution, Dr (Mrs) Ruth Abiola Adimula, said the lecture was convened to keep stakeholders abreast of their roles in the next year’s elections.
“The rationale behind the theme of the lecture is to ensure that for the 2023 elections, all stakeholders at different levels know their roles as voters, INEC, security personnel, traditional rulers, individuals.
“All of us are stakeholders, and we have our respective roles in 2023. It is our joint and collective responsibility that can make us achieve free, fair and peaceful elections. “
He said it was an intentional move to invite the Inspector General of police, ably represented to talk to the populace and different stakeholders present on their roles in the polls to make it hitch free.
Lateefah Ibrahim