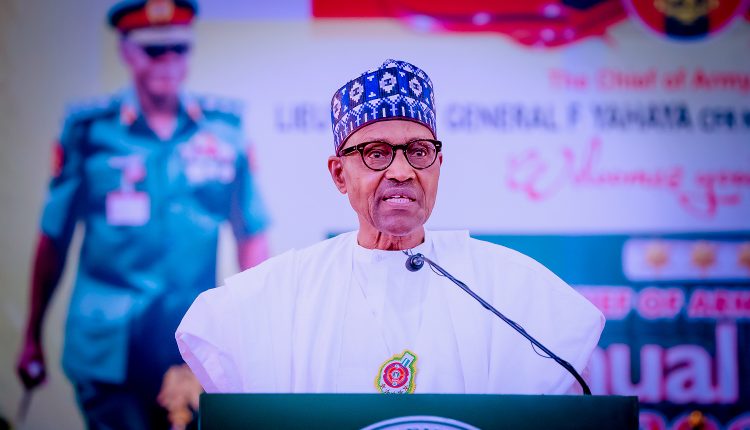 President Muhammadu Buhari has directed the Nigerian Armed Forces to remain apolitical and continue to operate within the framework of the constitution to ensure the successful conduct of the 2023 general elections.

Declaring open the Chief of Army Staff’s Annual Conference 2022 in Sokoto state, the President urged the Nigerian Army to continue to improve their Human Rights obligations during operations in line with global best practices.

On human rights, the President described improved obligations by security agencies on this issue as ‘‘the major pathway for winning the hearts and minds of the people.’’

Speaking on the 2023 polls, the President noted that it is imperative that the Army and the Armed Forces in general support the civil authority by providing a peaceful environment to enable its successful conduct. 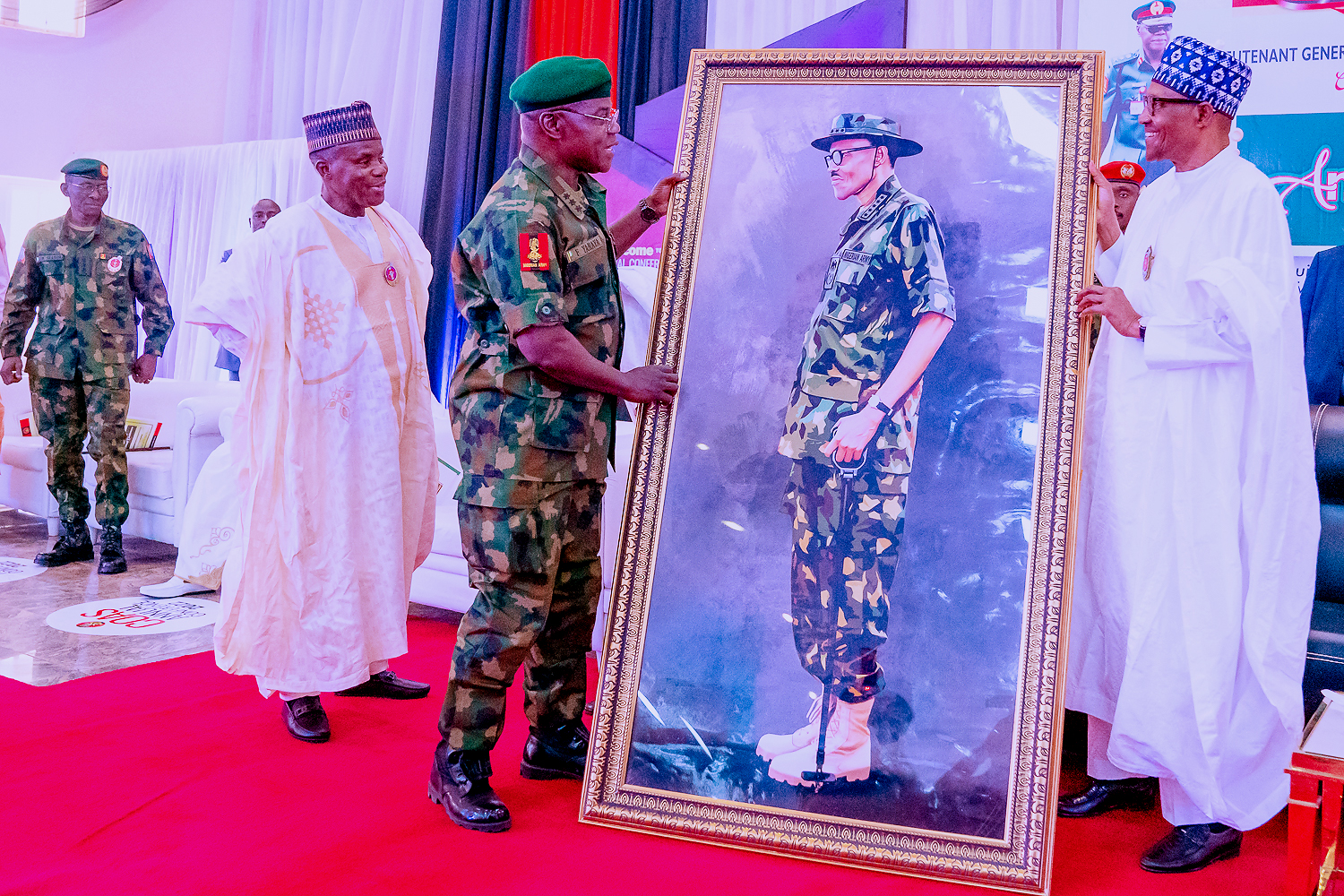 He expressed delight that the Chief of Army Staff has already issued a reviewed Rules of Engagement and Code of Conduct to guide personnel during the general elections.

‘‘The professionalism you exhibited in the successful conduct of the Anambra, Osun and Ekiti States Elections should also be reflected in the 2023 General Elections,’’ he said.

On the theme of the Conference, ‘Building a Professional Nigerian Army for 21st Century Security Environment’, the President challenged the army to focus on consolidating on the achievements made so far and ensure continuity to improve the country’s security situation.

He also tasked them to evolve enduring strategies that will consolidate their efforts in securing the country.

‘‘As a key element of our national power, the Nigerian Army will continue to be a major catalyst for our development especially by providing the needed aid to civil authority.

‘‘This Administration has therefore maintained a robust policy towards modernization of the Nigerian Army and the Armed Force Forces in general. 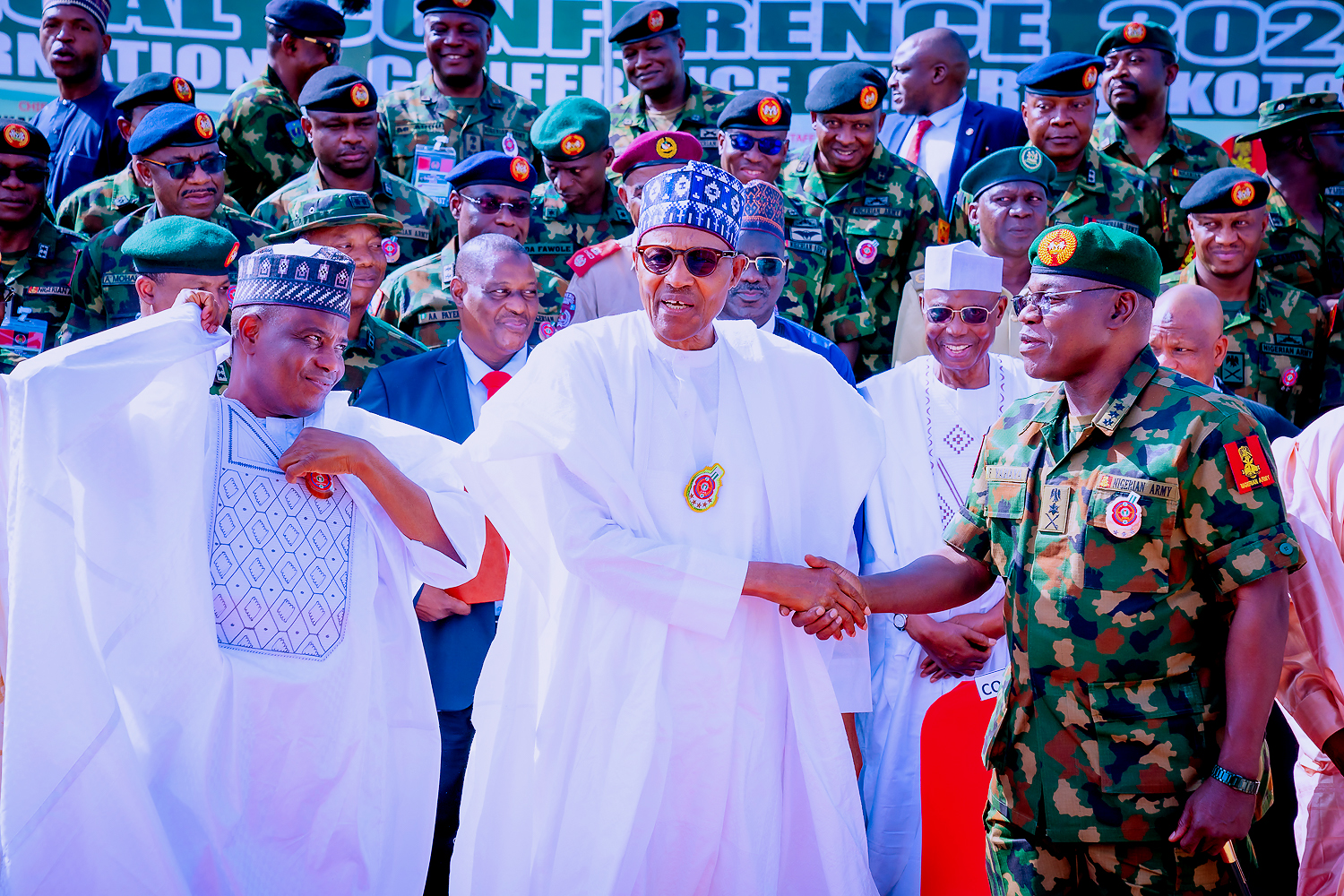 ‘‘It is evident that the ongoing progressive modernization of the Nigerian Army under our administration has greatly improved the capabilities as well as combat efficiency of the Service to discharge its roles,’’ he said.

President Buhari commended the Chief of Army Staff, Lieutenant General Faruk Yahaya and other Service Chiefs as well as Heads of various Security agencies for their determination and improved synergy in accomplishing his directives.

He expressed confidence that the renewed vigour and standard injected in operations as well as the collective resolve and improved civil-military relations would engender lasting peace and stability in the country.

The President reiterated that the provision of security to Nigerians would continue to receive premium attention by the Administration, adding that deliberate actions are ongoing to provide the necessary support to enhance national security. 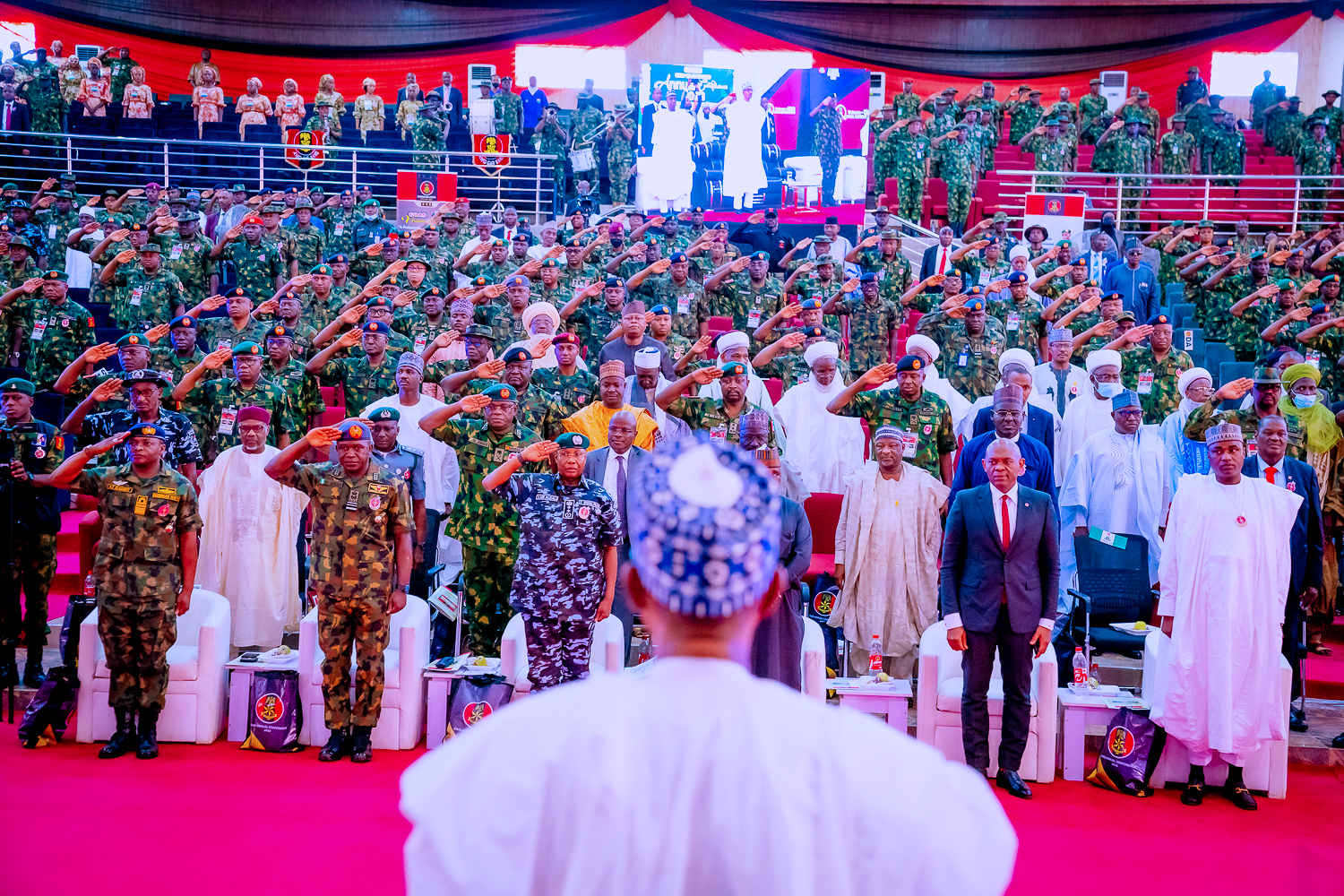 ‘‘Additionally, is the acquisition of platforms for the Army Aviation which has been considered in the 2023 Budget.

‘‘This modernization drive would be vigorously sustained as efforts are also being made to reform our indigenous military industrial complex, through partnership with our allies.

‘‘I am optimistic that this objective will be achieved soon to make us self-reliant in meeting our defence needs,’’ he said.

President Buhari urged the military to maintain the tempo in all theatres and double their efforts in information gathering to comprehensively defeat all forms of security threats facing the nation.

Acknowledging the successes achieved by the Army through the conduct of various training exercises such as RESTORE HOPE, FAST BOLT, STILL WATERS, ENDURING PEACE, GOLDEN DAWN, among others, the President stated that these have continued to improve the readiness of troops to checkmate various threats across the country. 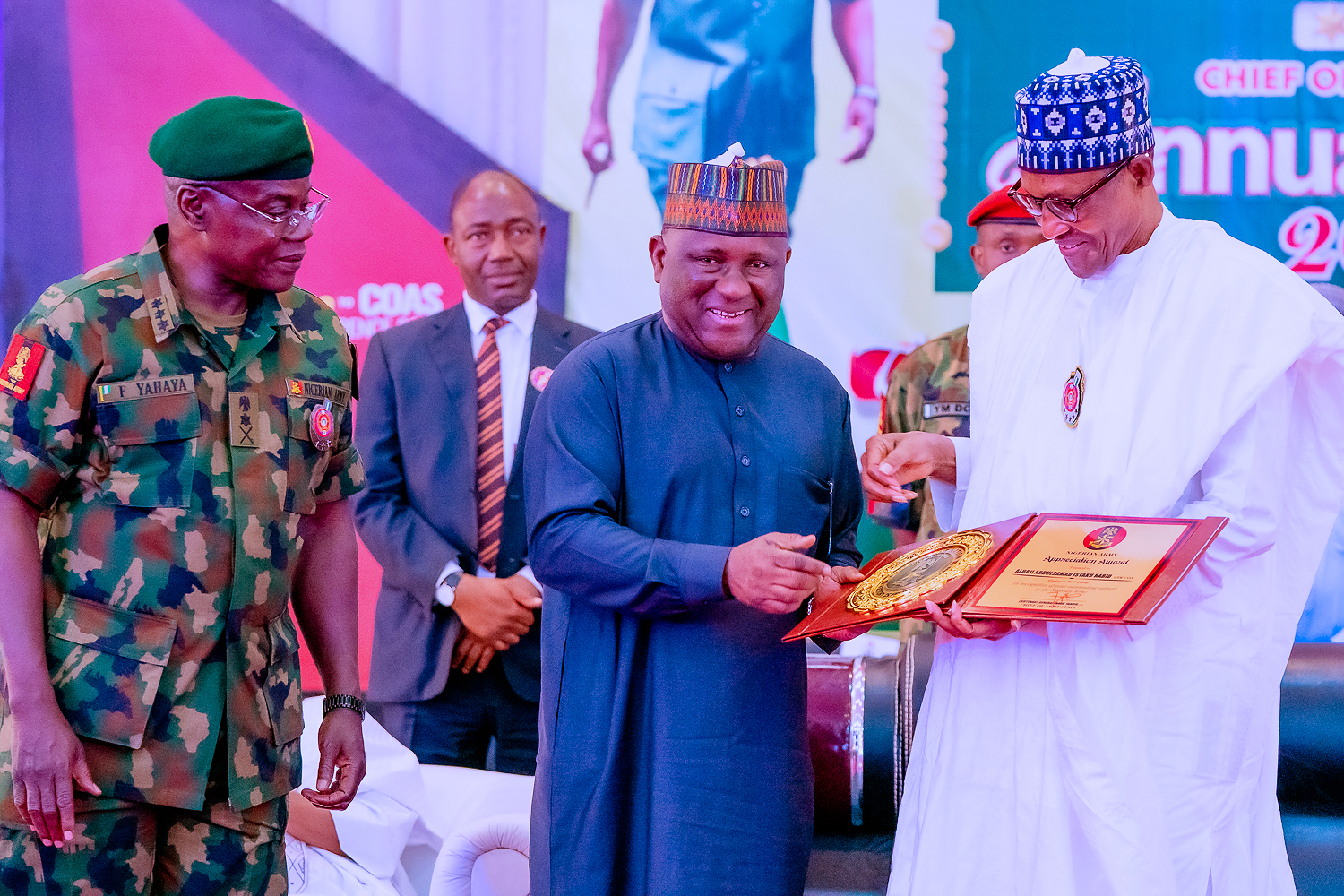 ‘‘I must also commend you on the tremendous successes achieved in the war against terrorism, particularly in the North East region.

‘‘The positive feedback I have been receiving reflects that an appreciable level of stability is being attained in the region.

‘‘Furthermore, the increased instances of surrender by terrorists is an indication of your resilience and resolve to bring lasting peace to the North East.

‘‘By the same token, your contribution to curtailing the youth restiveness and secessionist struggle in the South East as well as banditry in the North Central and North West regions are laudable.

‘‘This could be attributed to conduct of intelligence driven operations and improved synergy amongst the security agencies in the country,’’ he said. 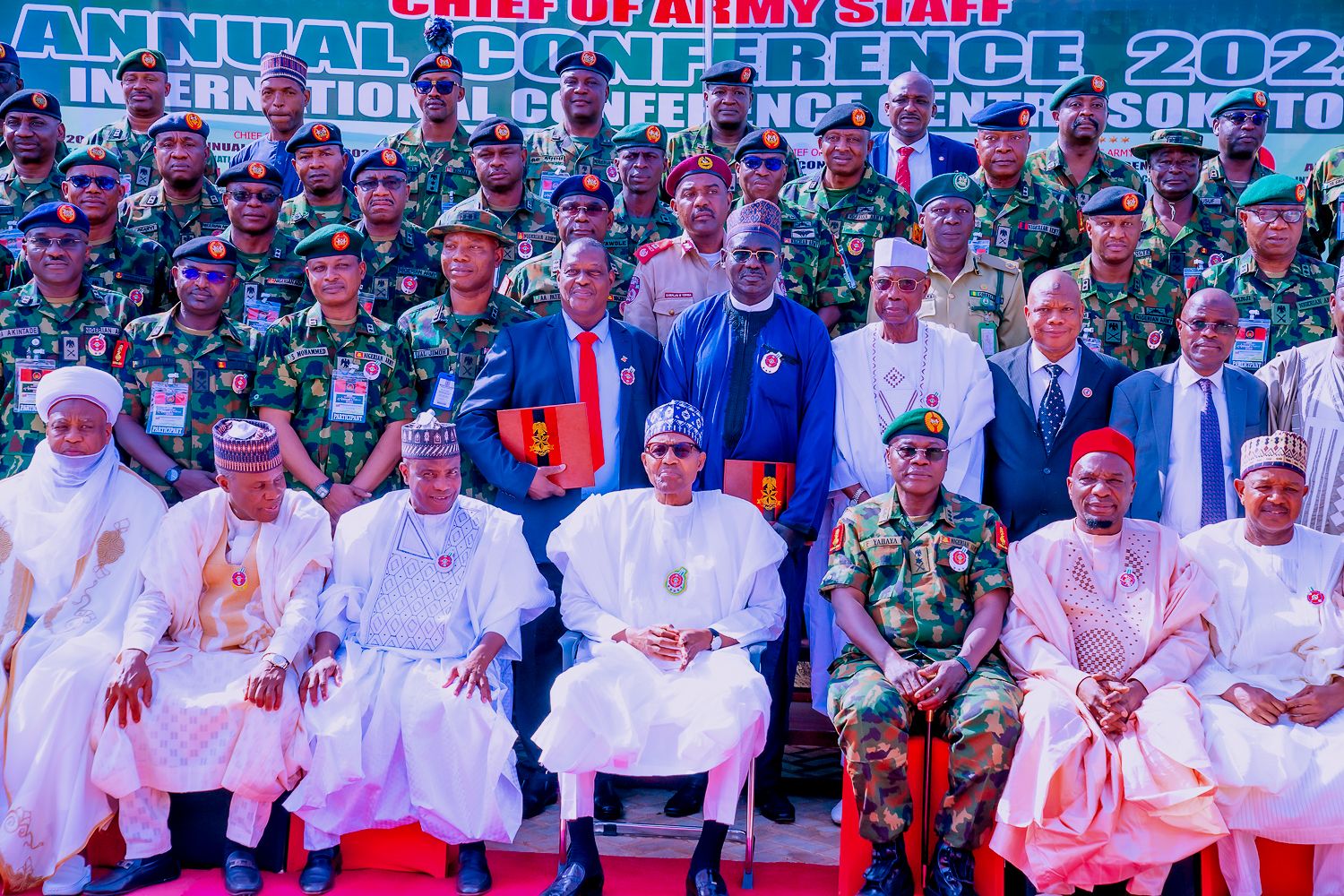 The President told the no fewer than 500 delegates attending the Conference that the country remains grateful to members of the Nigerian Armed Forces for their selfless services and sacrifices to the country.

‘‘We will forever be indebted to the officers and soldiers that paid the supreme price while defending Nigeria.

“The Government will continue to cater for the families of the fallen heroes as efforts are also sustained to improve the general welfare of the personnel through the provision of better amenities and programmes,’’ he pledged.

At the event, President Buhari presented the Nigerian Army Recognition Awards to six Nigerians including the Chairman of BUA Group, Abdul Samad Rabiu, the Founder and President of the Dangote Group, Aliko Dangote and the Comptroller-General of Customs, Col. Hameed Ali (rtd).

Governor Aminu Tambuwal of Sokoto State thanked the President for attending the conference in-person, while commending the collective contribution of the service chiefs, the Inspector-General of Police, the heads of security and intelligence agencies towards improving security in the Northwest region of the country. 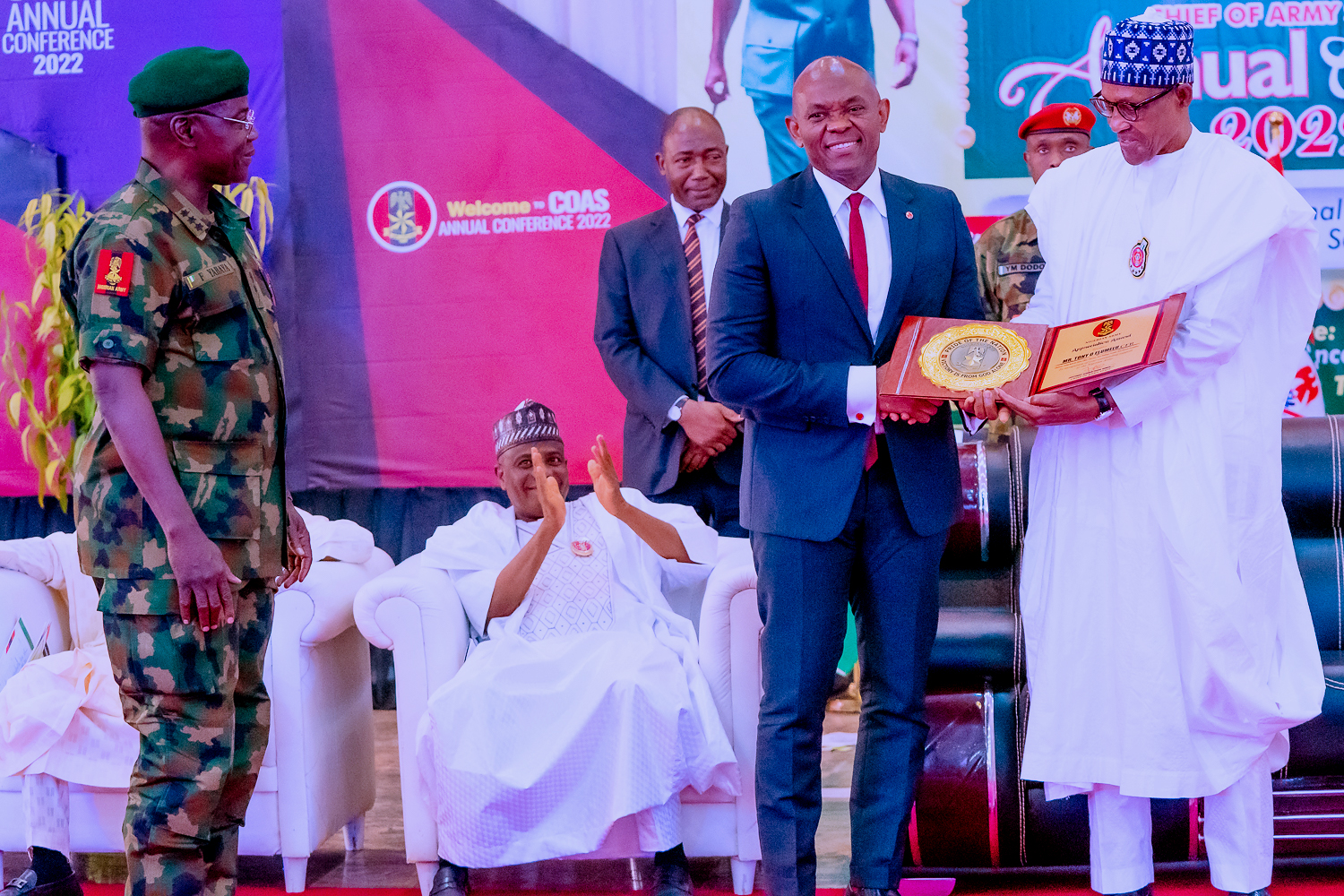 Earlier the President, accompanied by Governor Tambuwal, paid homage to the Sultan of Sokoto, His Eminence, Muhammad Saa’d Abubakar III.

In his remarks at the palace, the Sultan commended President Buhari for making mother tongue a compulsory medium of instruction from Primary 1 to 6.

The Sultan also lauded the Buhari administration for the return of the teaching of history at the basic educational level in the country. 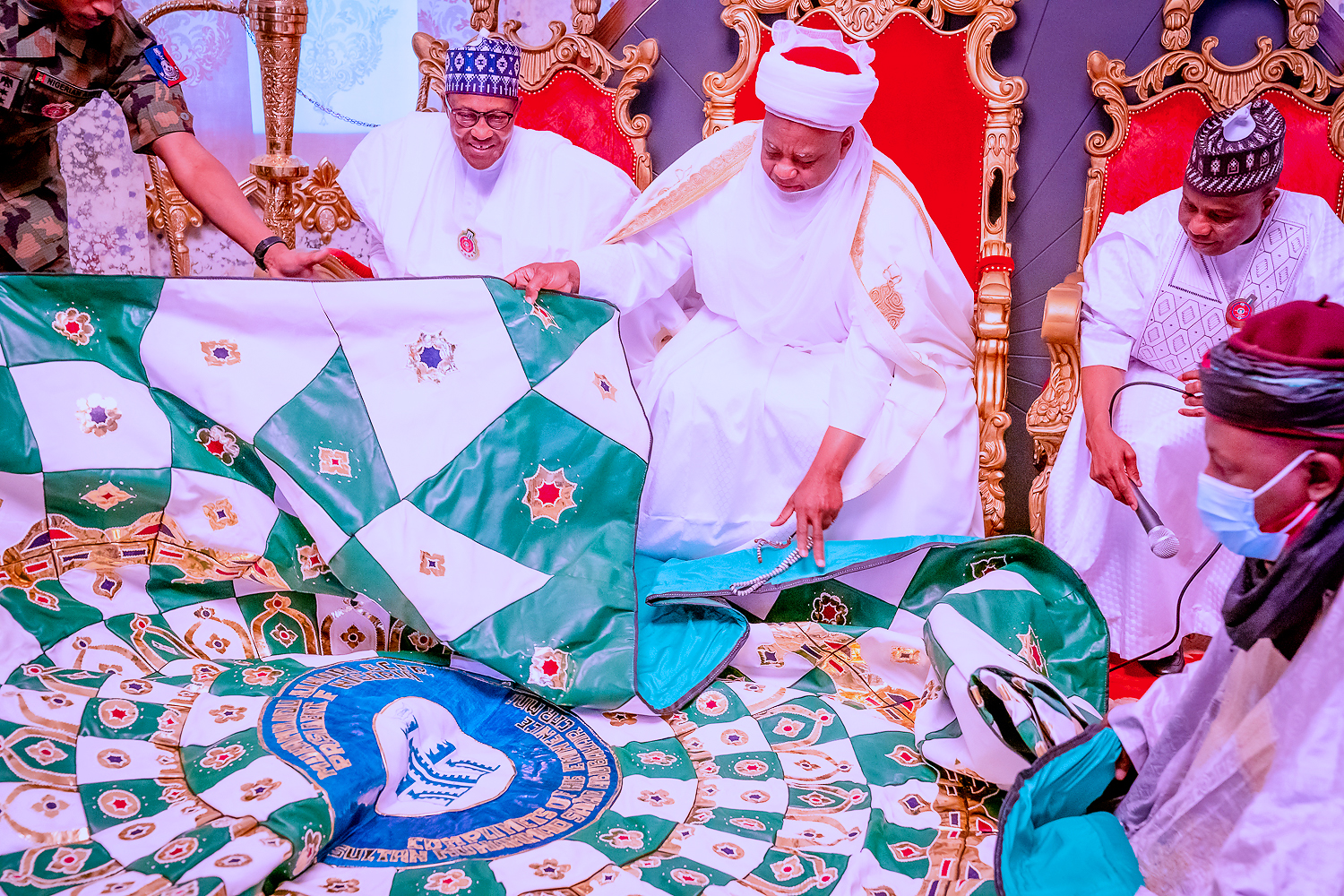 ‘‘We want to thank you for actualising these two great policies that we have been clamouring for several years. The teaching of our children in our indigenous languages is very important and we have always clamoured for it.’’

The Sultan welcomed the President’s resolve to bequeath a legacy of credible elections to the country, pledging the support of the traditional institution towards making this a reality.