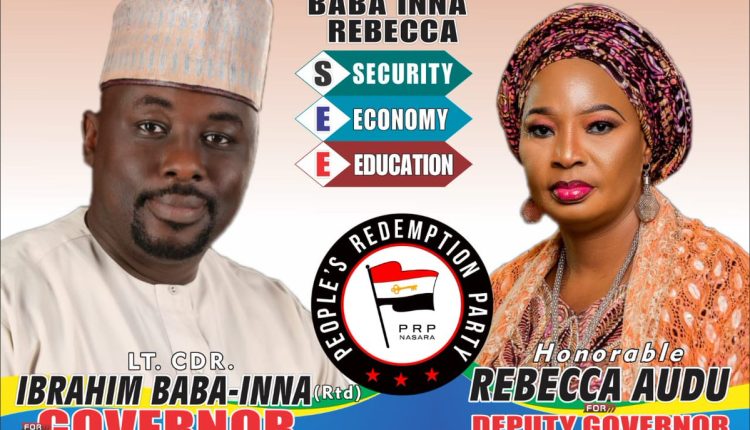 Baba-inna stated that choosing his deputy was confirmed over the weekend in Yola, the state’s capital, after extensive internal and external searches.

In addition, he disclosed she was qualified because of her track record in civil service and politics.

The People’s Redemption Party had a successful retreat with all the candidates in Adamawa and also used the opportunity to unveil her Excellency Madam Rebecca Audu as my Running Mate for the 2023 General Elections in Adamawa State. pic.twitter.com/nL1CgZjxJ7

Baba-inna stated that the PRP was here to stay and that, for the first time, the party had candidates for all the state’s political seats except for one seat in the Federal House of Representatives.

He said: “Our great party has filed candidates in three seats of the Senate, 25 seats for State House of Assembly and Seven out of eight seats of the Federal House of Representatives and the governorship candidate with his running mate for the 2023 general elections in Adamawa State.

“With the caliber of candidates being fielded by the party, l am not afraid of the forthcoming general elections in 2023.”

He said these candidates are bold enough to challenge other party contestants during the 2023 polls.

According to the governorship candidate, the meeting was not only to unveil his deputy but also to organise a retreat for candidates of the PRP to go back to the drawing board to strategise on how to persuade voters to vote the party to power in the state.

“We will not use violence but wisdom and intelligence and also to brainstorm on how we will win elections in the state,” he said.

In her remarks, Mrs. Rebecca Audu, a seasoned politician, said she was very grateful to her principal for choosing her to be his running mate for the 2023 general elections.

She, however, commended the party for standing by Baba-inna and called on the stalwarts to work assiduously to ensure the party’s victory in the state.