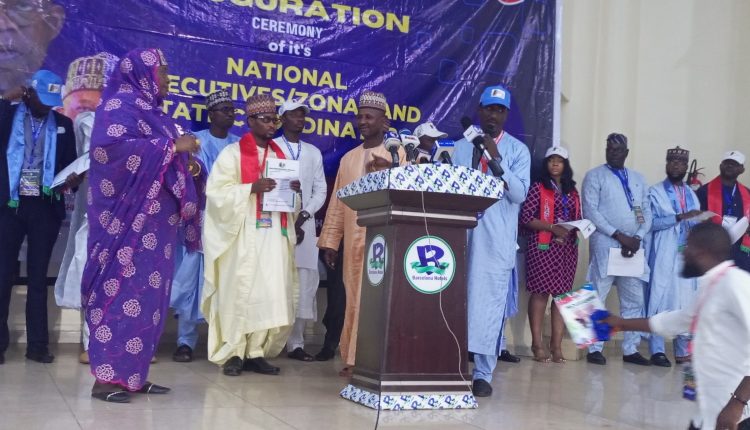 A National Support Group says the combination of Sen. Tinubu and Kashim Shettima, as the All Progressives Congress, APC, Presidential Candidate, and running mate, would put Nigeria on the right track of development.

The national coordinator of the support group, Mrs. Hadizatu Mustapha, made the statement at the inauguration of the National Executives, Zonal and State Coordinators of Jagaba Ambassadors and Media Action (JAMA) on Wednesday in Abuja.

Mrs. Mustapha also expressed optimism that the two gentlemen, if elected into power, would hunt for qualified talents around them to galvanise their skills and energy to put Nigeria on the path of peace and progress.

She said that it was a wise decision that the members of the APC elected Tinubu as the party’s presidential candidate for the forthcoming 2023 General Elections.

She added, “It is my hope and prayers that this combination of game changers will attract victory for our party come 2023, which will enable them to revamp the nation’s economy, enhance national cohesion, and restore hope in the country.

“The common feature connecting Tinubu and Shettima is that they were both achievers in their primary constituencies when tested.

“They are human resources builders whose successors have made them proud and improved on what was set before them.”

She, therefore, urged members of the Jagaba Ambassadors and Media Action (JAMA) not to relent in their efforts to go to the grassroots and mobilise massive support and votes for the party across the nooks and crannies of the country come 2023 general elections.

Earlier, the National Coordinator of JAMA, Alhaji Mohammed Kabir Uthman, disclosed that the cardinal objective of the group was to mobilise 15 million votes for Tinubu and Shettima in the forthcoming 2023 elections.

Uthman revealed that the organisation would use its structures from the National level, Zonal, States, and Local Governments to Polling units Stage across the 36 states of the Federation and FCT to sensitise Nigerians on the leadership qualities of Tinubu.

This, according to him, will ensure victory for Tinubu and Shettima’s presidential ticket in the 2023 general elections.

” I would like to use this opportunity to tell Nigerians that age is not a matter of leadership, but capacity, talent, and commitment. I believe Tinubu has all the leadership qualities to take Nigeria to the desired level.

” I called on all Nigerians to joint this our great organization to work toward the success of our candidate.”

The event’s high point was the inauguration of the National Executives, Zonal, and State Coordinators of JAMA, which was witnessed by thousands of youths, members, and supporters of APC from across the country.

JAMA is a platform that hosts various supporters of Sen. Tinubu and Sen. Kashim Shettima, especially the youth, intending to garner support and propagate the activities of the Jagaban, who is vying for the presidential seat of the country.