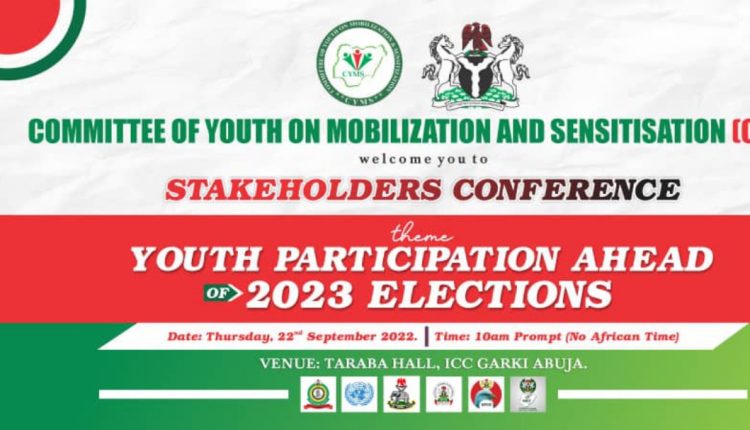 The Committee of Youth on Mobilisation and Sensitization Advocacy Group is calling for more efforts to achieving a free and fair 2023 general election in Nigeria.

The committee made the call at a stakeholders conference in Abuja the nation’s capital, with the Theme “Youth Participation Ahead of the 2023 General election.”

The conference was  centred on reawakening the consciousness of the youth on their roles and expectations towards the 2023 General election.

The Director General of the group, Mr Obinna Nwaka  said the season of political activities and campaigns will soon commence following INEC guidelines. However, we want to utilise this medium to appeal to political parties, candidates and their supporters not to violate INEC guidelines as we enter into the era of election.

“There is no doubt that both INEC, Security Agencies, Political parties and traditional rulers  are electoral stakeholders. But it is important to note that the youths are indispensable in our electoral process due to their involvement and the policy formulation process in the country and its implementation.

“As an organisation deeply constituted with grassroots presence, impressive electioneering track record on monitoring, mobilisation, observation and awareness creation on voters education and CVR, we are very much elated with the overall turnout of Nigerians especially the youts during the CVR exercise recently concluded by the INEC.”

Mr Nwaka further commended the peaceful and secured environment during the exercise with the support of security agencies and the awareness by all relevant stakeholders which includes Traditional Rulers, religious leaders and the entertainment industry among others adjudged that the 2023 general elections exercise will record the highest participation and acceptability since our democratic dispensation  despite the insecurity in some part of the country.

He further said the essence of the  Stakeholders Conference with the theme: Youth Participation ahead of 2023 General elections, is to share ideas on the organisation’s set objectives and programs to strategically involve the youth meaningfully as a stakeholder in view of the forthcoming election.

The Director General, National Orientation Agency, Mrs Garba Abari, who was represented by Mrs Theresa Mdukwe said her organisation commended the remarkable effort of the committee in mobilising the relevant bodies concerned and ensuring grassroot sensitisation of young Nigerians to participate and play active roles in governance and policy formulation.

Mrs Mdukwe said National Orientation Agency is also committed to giving the necessary support to all the stakeholders involve in securing free and fair elections in Nigeria.

“The Community and Orientation Officers in all the local government areas in Nigeria are also engaged in Educating and Enlighten Nigerians toward achieving credible election in Nigeria.”

Mr Samson Amadu, who represented the presidency applauded the committee’s effort, aims and objectives towards achieving a peaceful election in view of how youths are been used by desperate politicians.

“This is that time that Nigerian Youths are suppose to come together and shun any kind of violence that is capable of promoting the disintegration of our country.”

Mr Amadi said youths are the drivers of national development of any successful national, urged them to avoid any wrong doing that can destroy their future and Nigeria.