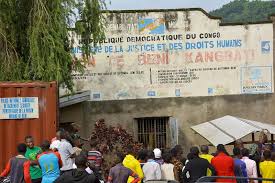 Atleast 800 inmates have escaped from a prison in eastern DR Congo after gunmen staged a jailbreak in which two policemen were killed.

The military spokesman, Captain Antony Mualushay in the beni region disclosed that armed men attacked the Kakwangura central prison in the town of Mutembo overnight on Tuesday.

“The initial toll, which is still provisional, is two policemen killed,” he said, adding that an assailant had also died.

A source in the prison service, speaking on condition of anonymity, said that out of the 872 inmates, all but 49 had escaped.

Mualushayi said an “unidentified Mai-Mai group” carried out the attack. The term Mai-Mai refers to an ethnic self-defence organisation, which are legion in the Democratic Republic of Congo’s troubled east.

But a respected US-based monitor, the Kivu Security Tracker (KST), said on Twitter that the suspects were the Allied Democratic Forces (ADF) a bloody militia that the Islamic State group says is its regional affiliate.

At least two police died and all the inmates escaped, the KST added.

The ADF has been blamed for thousands of deaths in eastern DRC, especially in the Beni area, and for attacks in neighbouring Uganda.

The east of the DRC, a vast country the size of continental western Europe, has been unstable for decades.

Scores of armed groups roam the region, many of them a legacy of two regional wars that flared at the end of the last century.