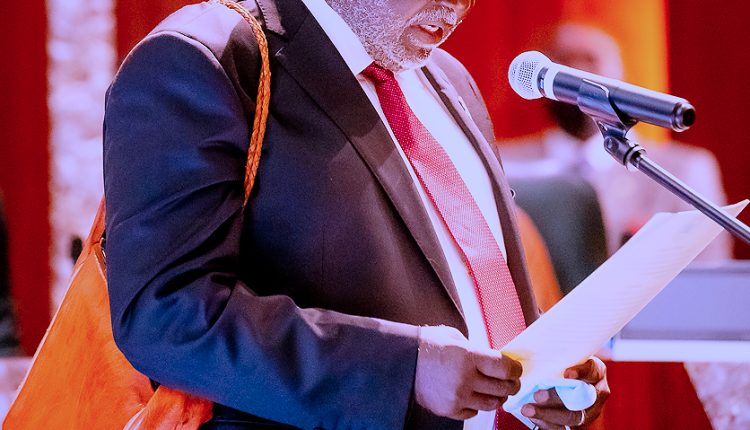 The newly sworn-in acting Chief Justice of Nigeria, Justice Olukayode Ariwoola says he will uphold the constitution of the country as he discharges his duties.

Justice Ariwoola made the declaration while speaking to State House Correspondents on Monday, soon after he took his oath of office.

The acting Chief Justice of Nigeria (CJN) said with the cooperation of his colleagues, the Justices of the Supreme Court, they shall not fail the nation.

He said: “What Nigerians should expect from me is to comply with, preserve, abide by and protect the constitution of the Federal Republic of Nigeria, that is what I will do essentially with the cooperation of my brother Justices of the Supreme Court. We shall not fail Nigerians.”

On the purported controversy surrounding the Supreme Court, the acting CJN said there is no controversy whatsoever.

He added that what transpired shortly before the change of guard at the apex court was an internal memo of the Supreme Court, written directly to the immediate past CJN, Justice Ibrahim Tanko and the matter is already being resolved.

“There is no controversy in the Supreme Court, we are one with the Chief Justice and that is why you heard the President said his Lordship (Justice Ibrahim Tanko) is disengaging on the grounds of ill health.

“It was an internal memo of the court; it was not a petition, it was not a letter. It was addressed by the brother-Justices of the Supreme Court and presented to his Lordship directly.

“They were issues to be resolved among Justices and we have started resolving them.” He said.

14 Justices of the Supreme Court had on June 20 written a protest letter to the then CJN, Justice Ibrahim Tanko, lamenting the difficulties they were facing in carrying out their duties.

Justice Ariwoola was sworn-in as replacement for Justice Tanko, who resigned his appointment on Sunday June 26, on health grounds.