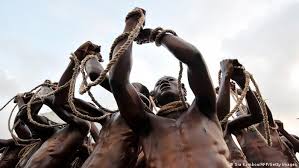 In a joint initiative, African countries are renewing their efforts to obtain reparations from European countries for the transatlantic slave trade and other colonial-era wrongs committed centuries ago.

The slave trade which affected millions of Africans was the largest forced migration in history and one of the most inhumane.

Over 400 years, Africans were transported to many areas of the world, yet no reparations have as yet been paid. The process is proving much slower than many Africans expected.

Recall that earlier this week, Ghana’s president, Nana Akufo-Addo, revived the push for slavery and colonial retribution at a summit on reparations and racial healing in Accra, Ghana.

He stated that “No amount of money can restore the damage caused by the transatlantic slave trade and its consequences which has spanned many centuries, but nevertheless, it is now time to revive and intensify the discussions about reparation for Africa.”

Some European nations that played key roles in colonial crimes and have hesitantly in recent years rendered an apology for their actions.

The African Union which has often been criticized for doing very little to ensure that reparations happen and very quickly  is pushing back.

John Ikubaje, who works at the AU commission, stated that the continental organization deserves a bit of credit instead, for the key roles it has been playing in recent successes in reparation negotiations by some African countries and the return of stolen artefacts.

“The issues of reparative justice did not start today, it started long time ago and African Union has been doing a lot in this regard,” he said.

According to Ikubaje, “reparation has been one of the focus [of the African Union] and you know actually what is happening on the continent in recent time, in terms of return of artefacts, they are not unconnected with the African Union declarations in terms of the themes of the year.”

slavery reparations to Africa and the African diaspora