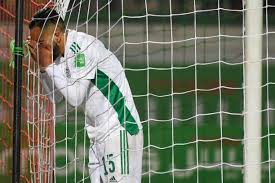 Algeria defender, Abdelkader Bedrane has been ruled out of the Desert Foxes international friendly against the Super Eagles of Nigeria.

According to information on the official website of the Algeria Football Federation, the 30-year-old sprained his ankle in Algeria’s 1-0 win against the Desert Foxes of Algeria last Friday at the Miloud Hadefi Stadium, Oran.

The centre-back has returned to his Saudi Arabia Professional Football League outfit, Damac as a result of the setback.

Bedrane has been capped 10 times by two-time African champions.

Tuesday’s game will kick off 8pm at the Miloud Hadefi Stadium, Oran.