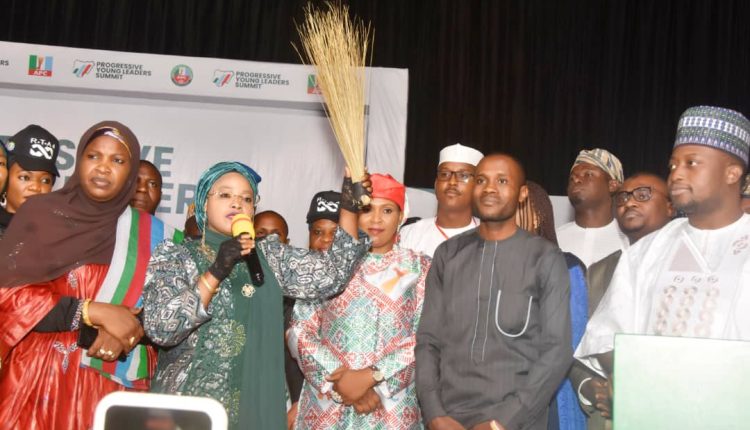 The Minister of state in the Nigerian Federal Capital Territory, FCT, Dr. Ramatu Tijjani Aliyu, and the National Secretary of APC, Otunba Iyiola Omisore, has received the National Youth Leader of the Action Democratic Party (ADP), Barrister Paul Ogudu, to the fold of the ruling All Progressives Congress (APC).

While receiving the decampee to the ruling party at the ongoing APC national youth wing summit held in Abuja, the Minister assured all and sundry that the APC is an inclusive party.

Aliyu commended the ADP’s former national youth leader for taking a bold step and for his farsightedness in joining the winning team.

She used the occasion to ask him to show others the road to victory come the 2023 general elections.

She said, “I thank you for making the right decision at the right time. However, now that you have realized, and by the power conferred on me by President Muhammadu Buhari as Minister of State FCT, I urge you to use your privileged position to show others the road to victory.”

The National Secretary of APC, Otunba Iyiola Omisore, thanked the decampee for joining the ruling party. He expressed confidence that the Tinubu/Shettima-led administration would run a youth-friendly government.

While responding, Barr. Ogudu publicly tore his ADP membership card and stated that his decision to join the ruling party was anchored on the principle of fairness, justice, and inclusiveness embedded in APC.

He assured them that more decampees are willing and ready to join the APC by banning campaign activities.

The event’s high point was the presentation of an award to FCT Minister of State Dr. Ramatu Tijjani Aliyu for her outstanding contribution to youth development and empowerment.