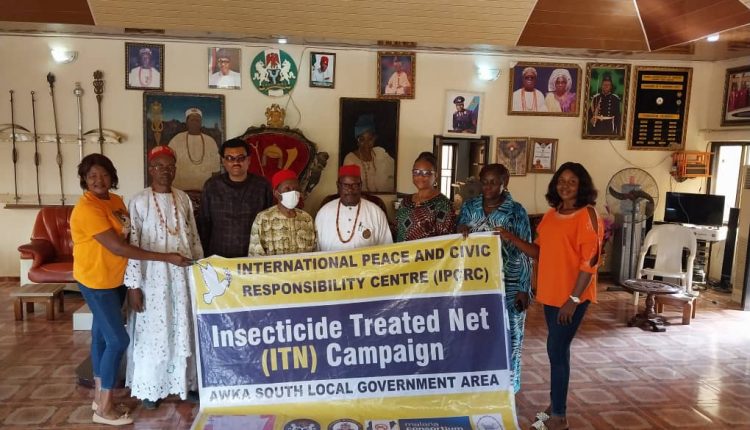 Anambra State Government in partnership with Malaria Consortium Group on Sunday, commenced the distribution of malaria free Insecticide-Treated Nets (ITNs) across all the 21 Local Government Areas in the State.

The appeal was made by Prince Chris Azor, Chairman, Anambra Civil Society Network (ACSONET) one of the groups involved in the process of distributing the Insecticide Treated Mosquito Nets across the State.

Civil Society Organizations appealed to citizens to make themselves available in their homes to receive the nets which will be freely distributed to every household in the State.

He made the appeal while his group was at the final stages of orientation and Sensitization of stakeholders on the usage and preservation of the nets.

While responding to inquiries at the Palace of His Royal Majesty Igwe Gibson Nwosu in Awka, the Citizens’ advocate said that each household would receive from 2 to 4 nets depending on their family size. He cautioned the people not to use the nets for fishing, grains preservation or other domestic purposes.

During a recent Media engagement, the Commissioner for Health, Dr. Afam Obidike, said it was necessary that Anambrarians be well informed about the distribution exercise.

“This exercise is in collaboration with the National Malaria Elimination Programme (NMEP), Malaria Consortium and with support from GiveWell Open Philanthropic Funding.

“The Insecticide-Treated Nets will be distributed to every household with the objective of reducing the scourge of malaria in the State,” he said.

“The 2022 Insecticide Treated Nets (ITNs) mass distribution, which commences Sunday August 7, is free for every household across the State.

“The objective of the ITN mass campaign is to ensure that for every 2 persons, there is one bed-net to sleep inside and the distribution will be done on door-to-door bases across all the 21 LGAs of the State,” Mr Commissioner concluded.

The household registration and simultaneous distribution of net will start from August 7 to August 17, as from 8:30am to 2pm on daily bases.

“Every household must ensure that they have someone at home within this period to collect their nets.”

According to him, the newly collected nets must be aired under a shade for 24hrs before hanging and sleeping inside, old nets should be replaced with the new ones.

The Commissioner while appealing to the residents in the State to cooperate with those employed for the distribution, urged the Media and relevant stakeholders to help in enlightening the public on the need to sleep inside the nets in order to eliminate malaria in the State.