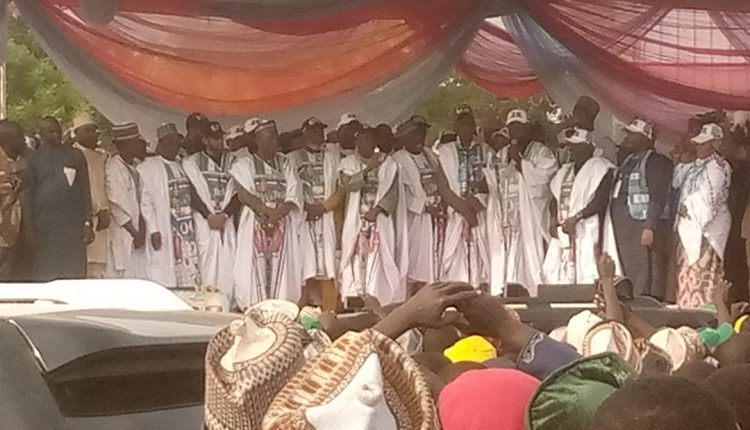 The All Progressive Congress, APC in Kano State has flagged off the campaign for its elective candidates for the 2023 general elections.

The campaign flag-off, which was conducted in an open space behind Gaya Central School in Gaya town, Kano South Senatorial District drew hundreds of thousands of supporters for the gubernatorial, deputy gubernatorial, State Assembly, and National Assembly candidates.

Governor Abdullahi Umar Ganduje said all the APC contestants for the state and national positions have sterling qualities making them stand out amongst candidates of other political parties contesting the 2023 elections in the state.

“All our contestants are in the best position to govern the state and beyond. We are therefore challenging all other political parties to present to our state similar candidates if they can,” said Ganduje.

His running mate Murtala Sule Garo was a local government chairman, he was the state chairman of the Association of Local Governments of Nigeria (ALGON) and he was Commissioner for Local Governments and Chieftaincy Affairs,” explained the governor.

He urged the supporters to vote massively for the candidates during the elections.

The APC gubernatorial candidate for Kano state, Dr.Nasir Yusuf Gawuna, who is also the incumbent Deputy Governor for the state commended Governor Ganduje for creating a democratic enabling environment for him to learn more about governance and emerge as the Governorship flag bearer of the APC in the state.

He said with God on his side, he does not doubt winning the election, stressing that when voted into power, he will rule the state with the fear of God.

“I want to believe that my destiny is in the hands of God and that I have no iota of doubt with God’s will, nothing would stop me from winning the race as we pray to God to take the spirit of shameful miss rule away from us.

“Our party remains formidable and vibrant and we are also willing to remain steadfast in face of all odds,” he said.

The Chairman of the APC in Kano state, Abdulahi Abbas urged the party faithful to leave no stone unturned as far as the march toward winning the 2023 elections is concerned.

“I want to tell this gathering that the APC would capture Kano state. We have today demonstrated our resolve of winning the election from top to bottom come the year 2023.

“No political party can match our strength. We are determined to take the bull by the horn in maintaining our dominance. Gawuna is our candidate and is going to be the next governor of Kano state.” he said.

He added that the acceptability and reverence of APC in Kano State are never in doubt and the party is surrounded by men and women of great wisdom.