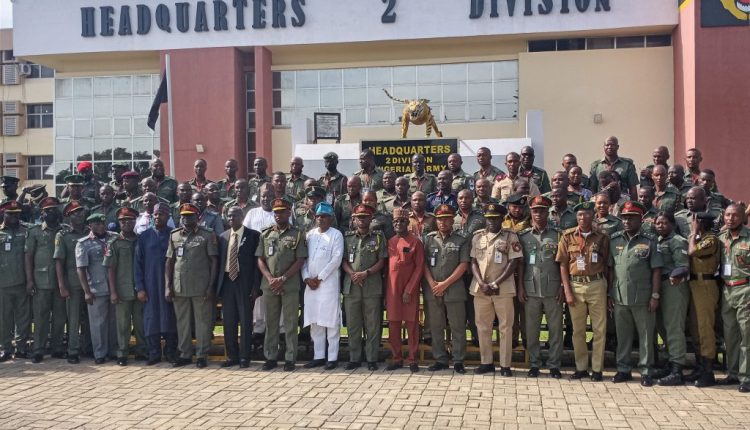 The Chief of Army Staff (COAS), Lieutenant General Farouk Yahaya, has said all hands must be on deck towards achieving the strategic objectives of having a highly motivated and effective Nigerian Army.

Speaking on the theme of the workshop: “Enhancing the Capacity of the Nigerian Army, Checks for Improved Professionalism in Office Management and Document Security,” the COAS affirmed that the Nigerian Army was putting the right peg in the right hole, considering the present security situation in the country.

Yahaya, who spoke through the General Officer Commanding (GOC), 2 Division, Ibadan, Major General Gold Chibuisi, noted that the workshop was aimed at appraising officers with modern development in the handling of documents, particularly with the increased use of cyberspace for relaying messages, disclosing that the Nigerian Army had gone to great lengths to source for competent resource persons for the workshop.

He said: “A team of professionals are partnering with the Nigerian Army in this respect. These erudite gentlemen, some of whom you may have met while they were in service, have graciously agreed to share their wealth of experiences with us in office management and document security.

“They will bring a unique blend of service and civilian dimensions to the topics for you to have a wider and a more encompassing understanding of the challenges in document security,” Yahaya revealed.

The COAS, therefore, urged the participants, who were drawn from the 2 Division and 81 Battalion of the Nigerian Army, to reciprocate by remaining motivated and professionally responsive in the discharge of their roles.

Chibuisi stated: “The Nigerian Army is currently tackling terrorism, insurgency, banditry, as well as other threats in various parts of the country. There is no doubt that we cannot live up to expectation without exercising a high level of professional competence driven by committed commissioned officers and soldiers.

“It has therefore become expedient to build your capacity with a view to enhancing your performance in the on-going fight against the aforementioned security challenges,” the GOC noted.

The Chief of Staff Administration, Brigadier General Muhammed Wabili, who spoke through the Director of Manpower Planning, Major General PP Malla, said the idea of the workshop came up for personnel across formations and units for a maximum performance, in order to address breaches in document security, noting that the knowledge acquired would go a long way to assist clerks in the protection and handling of vital documents.

The five day workshop had participants from the 2 Division and 81 Battalion of the Nigerian Army, including security heads and representatives from sister agencies in Oyo State.