Arsenal manager Mikel Arteta rounded on the referee Paul Tierney after his side’s hopes of wrapping up fourth spot were wrecked by a 3-0 defeat at rivals Tottenham Hotspur on Thursday.

Arsenal, who would have guaranteed a first top-four finish since 2016 with victory, looked comfortable early on. But their night fell apart after Harry Kane gave the hosts the lead from the penalty spot in the 22nd minute after Cedric Soares was adjudged to push Son Heung-min in the box.

Ten minutes later Rob Holding was shown a second yellow card for a block on Son, having already been booked earlier after tangling with the South Korean. 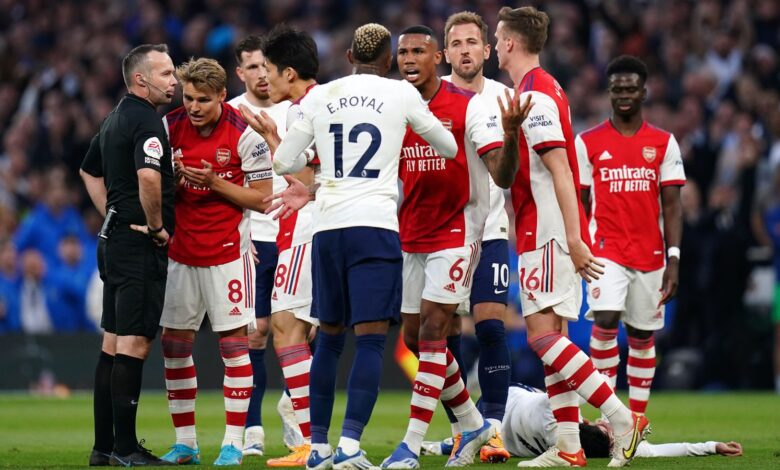 “I have two options I can lie to you, or I can be suspended, and I really want to be on the touchline against Newcastle,” Arteta told reporters when asked about the first-half decisions that left his side in disarray.

“If I say what I think I’m suspended six months. I’m allowed to give my interpretation of what happened but I don’t know how to lie. Ask the referee to come in front of the camera to explain his decision. It’s a shame because such a beautiful game was destroyed today.”

Despite the defeat, Arsenal remain in pole position in the race with Tottenham for fourth place and qualification for next year’s Champions League. With two games remaining, they have one more point than their arch-rivals.

“This game is history. Now it’s Newcastle. This is gone. It went out of our hands and we have to accept it,” Arteta added.

“Now we need to be the team that you saw from the beginning. You lose a football match in the conditions we lost them. It’s painful. But we have a huge match on Monday so we will try to beat them.”

Worryingly for Arteta he is running out defenders. Holding will be suspended for what looks a difficult trip to Newcastle, while Gabriel went off injured and Ben White was not risked despite being on the bench.

“Hopefully Ben will be fit and Gabriel will recover as we do not have enough players in the backline,” Arteta said.

“We have two games to play each. It’s in our hands and now we have to do our jobs.”