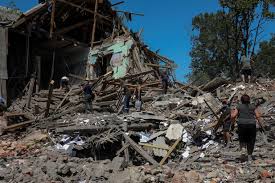 At least 15 civilians were killed in Ukraine’s Kharkiv region by Russian ‘shelling’ on Tuesday, regional governor Oleh Synegubov said in an online posting.

After weeks of relative calm, Russians have intensified shelling of the region. Synegubov said “six people had died in and around Kharkiv and another six in Chuhuiv, some 40 km, (25 miles) southeast of Kharkiv, while three had died in Zolochiv, 40 km to the northwest of the city.”

NIPOST, NRC collaborate on cargo movements and other services