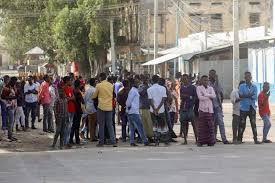 Atleast 5 were killed and 100 injured in opposition protests over fears of a delayed election. This comes hours after police confirmed shooting demonstrators and accused them of not following officers’ instructions.

This was disclosed by the president of Somaliland, Muse Bihi Abdi, stating that five were killed in the capital, Hargeisa, and the towns of Burao and Erigavo in Somaliland, the northern region that separated from Somalia three decades ago and seeks recognition as an independent country.

He said almost 100 others were wounded, most of them members of security forces.

The president blamed opposition groups for the unrest and said unauthorized protests would not be tolerated. The Somaliland government had allowed the protests to occur in six regions but in limited areas, which the opposition parties opposed.

Thursday’s events prompted the United States, the European Union and others to issue a joint statement expressing concern over “excessive use of force” and urging all sides to hold dialogue for a roadmap on elections.

Hundreds of people took part in Thursday’s protests after talks between the government and opposition failed and the opposition accused authorities of trying to delay the election.