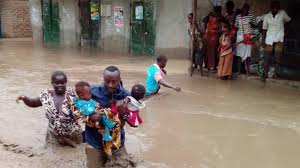 Atleast nine people have lost their lives  in a flooding  while many more are missing in the eastern Ugandan city of Mbale after two rivers burst their banks, leaving a trail of destruction.

This was disclosed by officials on Sunday, stating that police and the military have been called in to help in search and rescue operations in Mbale, where stranded residents could only watch helplessly as their belongings were washed away by the floodwaters.

Mbale City resident commissioner Ahamada Waashaki have stated that nine bodies had been recovered so far, including one of a soldier.

“Many more people are missing and feared dead,” he said.

“There is a lot of destruction, roads cut off, buildings submerged as a result of heavy rain that started last night until this morning.”

He said the situation became worse when the Nabuyonga and Namatala rivers burst their banks, causing flooding across most parts of the city.

“Police and military marine forces will be coming to help in the rescue and search for dead bodies as we provide relief to the affected population,” her office said.