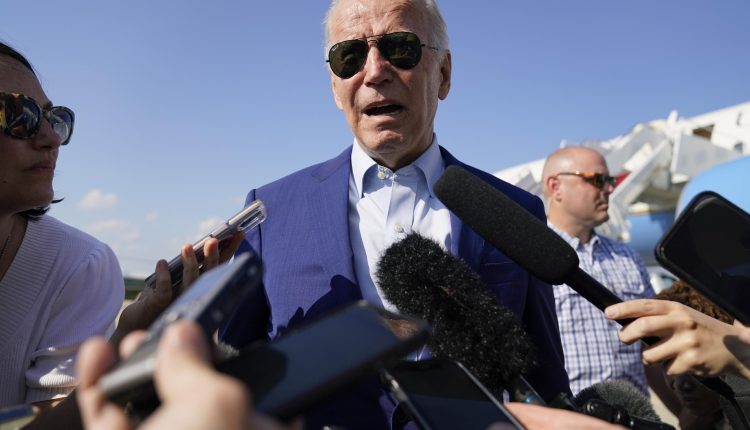 US President Joe Biden has tested positive for Covid-19 and is isolating at the White House.

The 79-year-old, who is fully-vaccinated and has twice received booster jabs, is experiencing “very mild symptoms” and will continue to carry out all his duties, press secretary Karine Jean-Pierre said.

The president is taking the antiviral medicine Paxlovid, her statement added.

In a tweet Mr Biden said he was “doing great” and “keeping busy”.

Consistent with White House protocol the president will continue to work in isolation until he tests negative, Ms Jean-Pierre said – and will take part in meetings via telephone and Zoom.

He said Mr Biden went to bed feeling fine but did not sleep well and then tested positive on Thursday morning.

In a press briefing at the White House on Thursday afternoon, Ms Jean Pierre said that Mr Biden had continued working throughout the day and held calls with a number of US mayors and government officials.

Dr Jha said that Mr Biden’s vaccination status meant that his risk of serious illness was “dramatically lower”, and was further reduced by the anti-viral drug he was now taking.

He added that Mr Biden will return to normal activities after a negative test.

The White House medical unit will inform all close contacts of the president during the day, Ms Jean-Pierre said earlier, including any members of Congress or members of the press who were with Mr Biden during his visit to Massachusetts on Wednesday. It is unclear where he was infected.

First Lady Mrs Biden said she had spoken to her husband and he was “doing fine”.

“He’s feeling good. I tested negative this morning. I’m going to keep my schedule. According to CDC guidelines, I’m keeping masked,” she said.

Mr Biden, who is the oldest president in US history and turns 80 this year, last tested negative for Covid on Tuesday, the White House said.

Mr Biden was judged “fit for duty” and described as “healthy” and “vigorous” by his physician, Dr Kevin O’Connor, during his last physical examination in November, according to the BBC’s US partner CBS.

The White House confirmed that US Vice-President Kamala Harris, who caught Covid back in April, had tested negative, although an official later said she was being considered a close contact of the president.

Should Mr Biden become unable to carry out his duties due to illness she would be given presidential powers.

This happened briefly in November when Mr Biden was put under general anaesthetic during a regular health check.

Mr Biden is not the first US president to suffer Covid after his predecessor Donald Trump had to be taken to hospital after contracting the virus in October 2020 while he was in office.

There have been 89.7 million Covid cases in the US and more than one million deaths, according to the Centers for Disease Control and Prevention (CDC).

The US has been seeing a rebound in cases, which are up by more than 25% in the last month, according to CDC data.