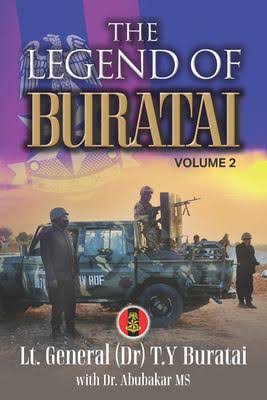 A Nigerian news magazine, Our Nigeria, has launched  a book titled, ‘THE LEGEND OF BURATAI’  to  honour the former Chief of Army staff,  Major General Tukur Buratai Retired  in Abuja, the nation’s capital.

The book was written to portray the legendary efforts of the former Nigerian Chief of Army staff in fighting the insurgency in the North-eastern part of the country where the former General hails from when he was serving the nation.

The book author Dr, Abubakar Muhammad Sani, said the nine-page documentation which is basically for children and animation film adaptation of the former Chief of Army Staff and current Ambassador of Nigeria to the Republic of Benin, Lt. Gen. Tukur Buratai, is laced with information meant for Primary four to six and Junior Secondary school students.
The Cheif launcher of the Book, Senator Bola Ahmed Tinubu and Presidential Candidate of the All Progressive Congress, APC, who was represented by the Chairman House Committee on Defence, Mr. Babajimi Benson, said the book came at a time when children of this generation need to be educated on how some of the Nigerian heroes contributed immensely towards sustaining peace and unity in the country.

Mr. Benson said Buratai’s effort deserved to be remembered especially for the young generation to copy from the legendary hero.

Also the Chairman of the Occasion, the former governor of Rivers state in southern Nigeria, Rotimi Amechi represented by the Senator Ayogu Eze said the efforts of Tukur Buratai has crippled the strength of Boko Haram in the Northeast region and other insecurity challenges bedeviling the nation during his time.

The celebrant, Major General Tukur Buratai (rtd) expressed appreciation to the author and the dignitaries that graced the event to celebrate his efforts during his service year as Chief of Army staff.

“I am very excited to be recognised as a legend in my dear country, I believe in one nation and security is the backbone of every nation, state and community that harnesses the people together.

He also added: “When I became the chief of Army staff, Nigeria was at the stage of disintegration particularly the Northeast region which was almost taken over by the insurgents including my hometown Buratai in Borno state”

“With the help of Almighty God and the effort of the Nigerian Military under the able leadership of the President Muhammadu Buhari administration in fighting against insurgency today, Northeast region security challenge, had reduced drastically including some parts of the country despite the challenges of banditry amongst other in the country which will soon become a past”, Buratai added.

The animated Book of Rt Major General Tukur Buratai is expected to expose the school children’s knowledge on the contribution of some Nigerian leaders to sustain peace and unity in Nigeria.

THE LEGEND OF BURATAITukur Buratai