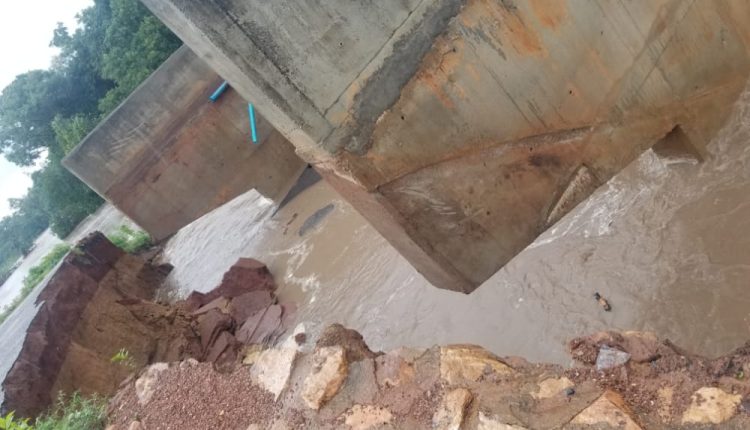 The collapsed bridge which was constructed in 2010 during the administration of former Governor of Kwara state, Bukola Saraki could no longer contain the volume of water that flooded it during the downpour.

Meanwhile, socio-economic activities between the two countries along that border has been temporarily halted.

Some of the commuters who spoke with VON want quick intervention of both countries in the interest of sustainable business activities.

In his reaction, the Emir of Yashikira, Alhaji Umar Usman Seriki called on the Federal Ministry of Works, the Federal Road Maintenance Agency, FERMA and the Kwara State Government to as a matter of urgency come to the aid of the people in the area so as to find urgent solution to the collapsed bridge.

One of the residents of Yashikira, Mallam Lafia Gunu said the situation was worrisome as his mother, Hajia Halima Lafia who travelled to Benin Republic is now stranded there due to the collapsed bridge.

He appealed to the authorities concerned to urgently embark on the repairs of the bridge or put in place an alternative route for commuters to ply particularly those who earn their daily living along that route.

Speaking on the development, the Federal Controller of Works overseeing kwara, North Central Nigeria,
Engineer Kayode Ibrahim disclosed that his men have already embarked on an accessment trip to acertain the level of damage and to find a temporary solution .

Engineer Ibrahim said the staff of the Federal Ministry of Works would check the environment while the outcome of their visit would determine their next line of action.

He however, assured residents that an immediate solution shall be provided because of the economic importance of the bridge to the two West African countries.