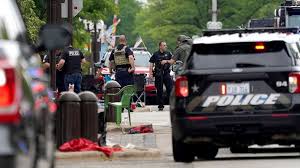 A man suspected of killing seven people at a 4 July parade near Chicago planned the attack for weeks, police say.

The suspect is believed to have “disguised himself in women’s clothing to escape” the scene with the fleeing crowd, officials added.

Some 30 people were also injured in the shooting on Monday in Highland Park, an affluent Chicago suburb.

Police say they are still piecing together evidence from the shooting, during which “the suspected gunman is accused of firing more than 70 rounds.”

“He blended right in with everybody else as they were running around, almost as if he was an innocent spectator as well,” Mr. Covelli told a press conference.

Investigator’s believe the suspect’s disguise allowed him to conceal his facial tattoos and aid his escape.

FCTA disburses over N2.9 to Area council and Stakeholders