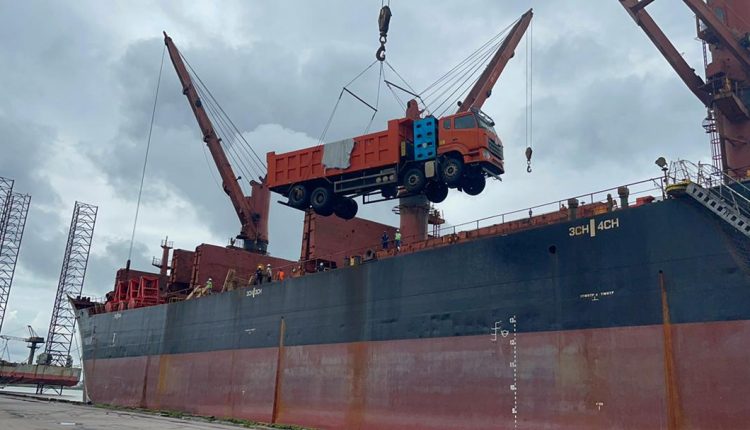 The Nigerian Port Authority Calabar has witnessed an inflow of vessels arriving from different parts of the globe, since achieving ISO 9001 certification.

The latest arrival at the International seaport is MV Yong Jin on September 24, 2022 from the Republic of China with 11,800 metric tonnes of general cargo.

Addressing Newsmen at the EcoMarine Terminal of the Calabar Port in Cross River State, south-south Nigeria, the Port Manager, Dr. Festus Olumati said that the vessel, MV Yong Jin was the second longest cargo ship to berth this year.

“As a matter of fact, the vessel arrived from China with a total tonnage of 11,800 metric tonnes of general cargo comprising 107 heavy duty vehicles, 11,000 (eleven thousand) metric tonnes of large pipes, buses and others,” Olumati stated.

The Port Manager further said; “the length of the vessel is 190 metres, which is also a large vessel. This is the second large vessel berthing at the Calabar Port this year. Within three months, this is the third vessel we have received in this port.”

Olumati said that the Calabar Port has been mandated to increase traffic, a directive, which was reiterated when the Managing Director of the NPA, Mr. Mohammed Bello Koko paid a familiarisation visit to Cross River.

“We have been receiving other smaller vessels no doubt, but in accordance with the mandate given to us by the Managing Director of Nigerian Ports Authority, Mr. Mohammed Koko during his last visit on us, we are not resting on our oars.

“This also goes to show that Calabar Port is working. He had asked us to look for cargo vessels to make sure this port works and that is our mandate in conjunction with the terminal operator, EcoMarine Terminal, ECM,” the Port Manager stated.

Changing economy
On the economic effect witnessed since the berthing of the Chinese vessel at the Calabar Port, Olumati noted that with the number and varieties of cargo on board the vessel, which had Mr. Jian Xin as captain, many young people were now working at the port.

“You can see a lot of persons working here; they are basically the indigenes of Cross River State. There are also those of the catchment area and working to boost the economy. As they work, their welfare is also paramount to us and I guarantee you, the port has a multiplier effect on the Cross River economy,” he explained.

In eearly July this year, a large vessel conveying more than one 100 trucks and equipment berthed at the Calabar Port, a feat which elicited accolades from the Managing Director for the staff and management.

Calabar Port in Cross River and Onne in Rivers States remain the two seaports in Nigeria with ISO certification.