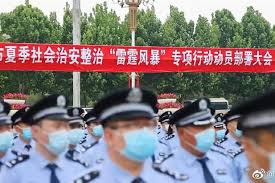 A local deputy police director in China has been dismissed following an investigation into a brutal attack on a group of women in a restaurant.

The incident, which was captured on a viral video, sparked an intense debate about gender violence in China.

A report released on Tuesday found the deputy director – surnamed Li – and other police officers had showed “slow and improper handling of the case.”

The incident, which occurred in the early hours of June 10, saw “a man approach a woman and put his hand on her back.” The woman responded by pushing him away.

The man is then seen striking her in retaliation before other men drag her outside and continue ‘bludgeoning’ her as she lies on the floor.

The group of men are also seen attacking her dining partners. Another woman who tried to ‘intervene’ was pushed away before landing on the back of her head against the stairs.

Two of the women were admitted to hospital and were in a “stable condition and not in mortal danger,” while two others sustained minor injuries, officials said.

Police reached the site at 03:09 (19:09 GMT), almost half an hour after they received the first police call at 02:41, according to a report by state media outlet the Global Times.

The report adds that the “suspects had fled the scene just minutes after the crime, prompting many on social media to criticise the police’s response.”

Police later said they had arrested nine people on suspicion of violent assault and “provoking trouble.”

It added that aside from the police deputy director of Lubei province, where Tangshan is located, four other police officers were also under investigation.

The report also revealed one of the “main suspects was suspected to be involved in a number of other crimes, including illegal gambling, illegal detainment of others and provoking trouble.”

Police added they were escalating their investigations to discover whether the suspects had ties to criminal gangs.

The ‘viciousness of the attack’ sparked outrage and heated debate on social media, taking up one of the most-discussed topics on Weibo, a popular social microblogging platform in China.