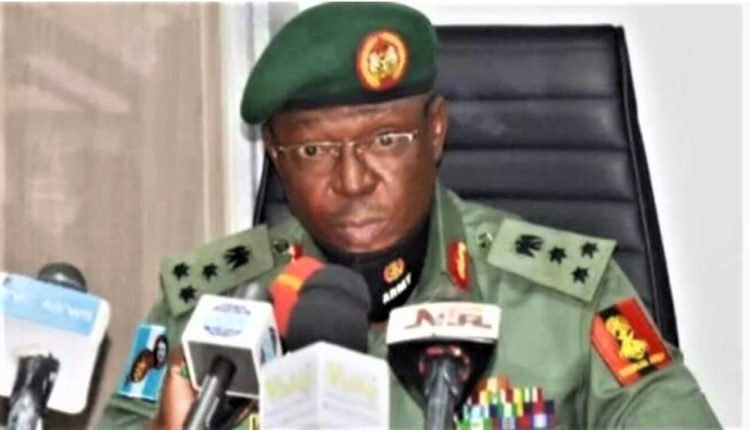 Ahead of its 4th Quarter Chief of Army Staff’s (COAS) Conference, the Nigerian Army says it has over the years demonstrated its capacity and zeal in defending Nigeria’s territorial integrity and sovereignty against external aggression, giving aid to civil authority in mitigating internal security challenges in the country.

The Chief of Army Staff (COAS) Annual Conference 2022 which was to be held in Sokoto State is expected to commence from 4th of December to 10th December 2022 at the International Conference Centre, Kasarawa, Sokoto State, North West Nigeria.

The Director, Army Public Relations, Brigadier General Onyema Nwachukwu while briefing journalists on Thursday in Abuja, an activity that herald the conference said, the Annual Conference with the theme: “Building a Professional Nigerian Army for the 21st Century Security Environment” offers an avenue to evaluate and comprehensively review ongoing operational engagements of the Nigerian Army in all theatres of operations across the six geo-political zones.

This, he said would provide the Nigerian Army an in-depth insight to take far reaching decisions that would be result oriented towards achieving its set objective of addressing the multifaceted security challenges in the country.

The Conference will review decisions taken at the Chief of Army Staff third quarter conference, while series of briefs and other updates bothering on various activities of the Nigerian Army will be presented and deliberated upon at the conference.

“The conference would also create an opportunity for the COAS to have a face-to-face interaction with all the General officers Commanding, field commanders and other senior officers to provide possible guidance on enhancing NA activities and operations”

General Nwachukwu said the purposeful leadership drive of the Chief of Army Staff, Lt Gen Faruk Yahaya have tremendously enhanced the capacity and dexterity of troops in the onslaughts against terrorists, bandits and other criminal elements in the country.

“With his transformational and selfless leadership drive, troops have continued to decimate Boko Haram/ISWAP terrorists in the North East, leading to the obliteration of terrorists’ high-profile commanders, foot soldiers and their hideouts. This has led to mass surrendering of terrorists and their family members in droves”

“Troops have also maintained this feat, through their operational engagements in other theatres of operations in other parts of the country, with significant successes recorded. These feats would not have been achieved without the support and collaboration of law-abiding Nigerians, sister services and other security agencies, the political leadership and the international community, “ he stated.

While the conference will be declared open on Monday 5 December, 2022.The opening ceremony will feature a lecture titled “Proliferation of Regional/State Security Outfits in Nigeria: Challenges and Prospects” by the former Chief of Defence Staff.General Martin Luther Agwai (retired), ” He said.

Amongs the activities lined up for the event according to the Army Spokesman are commissioning of various Nigerian Army Civil Military Cooperation projects in various communities in Sokoto State, recognition and appreciation of eminent Nigerians who have in no small measure supported the Army.