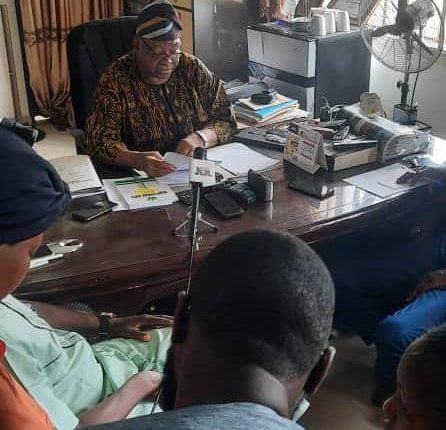 The Resident Electoral Commissioner, REC, in Kwara State, North Central Nigeria, Garba Madami, has asked the state chapter of the Peoples Democratic Party, PDP, to apologise to him within 48 hours, for alleged defamation of character.

Madami gave the warning while briefing newsmen in Ilorin, the state capital.

He said he would seek redress in court if the party refused to do a public apology in the print and electronic media within 48 hours starting from Monday.

The spokesman of the PDP in Kwara State, Tunji Moronfoye alleged that the Resident Electoral Commissioner had collected N300m from Governor AbdulRahman AbdulRazaq, to manipulate the 2023 general elections in the state.

Madami said, “If the PDP fails to apologize within the time frame, I will take a legal action for defamation of character and assassination of my integrity built over 40 years and has been one of my life proven here in Kwara since assumption of office in July 25th, 2018.”

He, however, described the allegation as unfounded, baseless and a pack of lies and challenged the PDP to provide proof of the allegations.”

Madami also described another allegation where Moronfoye quoted him to have said at a management meeting of the Commission that he disliked former Senate President, Bukola Saraki and would work to stop his political interest in Kwara State.

He said; “this is false, lies with intent to defame my integrity and name.”

The Resident Electoral Commissioner further denied the accusation of importing IVED machines from Niger State to Kwara for the registration of voters.

He said; “at the last meeting of Resident Electoral Commissioners on June 9th, 2022, with the Independent National Electoral Commission, INEC to review the Continuous Voters’ Registration, CVR, Permanent Voters Card, PVC collection and challenges, I joined most of the RECs who complained about inadequate IVED machines and the surge of the crowd in the last-minute rush to register.

” I requested three IVED machines for large Local Government Areas based on Kwara registration data available to me, Ilorin West, Asa, and Baruten. Other RECs collected between 4-15 IVED machines.”

On the call for his redeployment from the state by the PDP, Madami said that remained the prerogative of the INEC led by the Chairman, Professor Mahmood Yakubu.

He assured the people of Kwara State that INEC under his watch would conduct free, fair, credible, transparent, and peaceful elections come 2023, saying “I am for everyone in Kwara and not for any individual.”