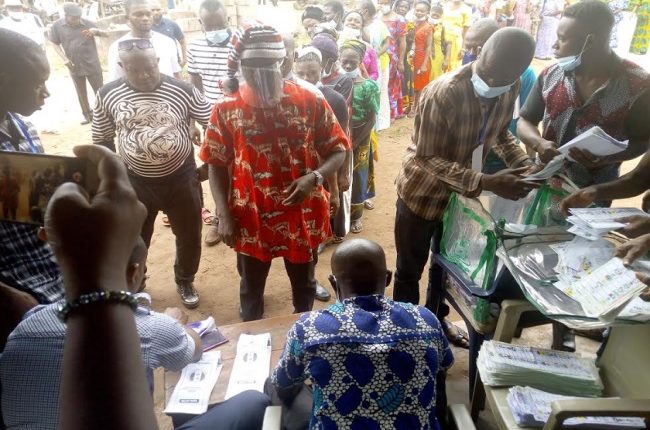 The Inter-Party Advisory Council, IPAC, has dragged the Ebonyi State Independent Electoral Commission, EBSIEC, to the Federal High Court Abakaliki over the alleged exclusion of some registered political parties from participating in the just concluded council Election in the State.

This was made known by the Ebonyi State Chairman of the Young Progressives Party, YPP, Mr. Stanley Oyibe, while interacting with journalists on Monday at the Federal High Court in Abakaliki, the State Capital.

Recall that, before the conduct of the Ebonyi local government polls, IPAC in the State had condemned the alleged outrageous cost of the expression of interest and nomination forms by the EBSIEC for both local government chairmanship and ward councilorship candidates.

The group’s Spokesman, Mr. Oyibe, said the members of IPAC came to the court today concerning the matter they have with the EBSIEC, expressing surprise why the court didn’t sit, following their suit.

He said, “I don’t know why the court couldn’t sit. The registrar said he will communicate with us but who knows when that would be?”

He added that “all the registered political parties are standing their ground, concerning the council polls, to get Ebonyi State right.

“We are pursuing our aim, to get it right. We aim to build new governance that will carry everybody along in Ebonyi State.

“The matter was filed correctly, everything was done according to the court proceedings, and I hope, as it stands now, all things have been put in place.

“So, the EBSIEC should have given us a fair playground for all the registered political parties to take part in the local government elections,” he added.

Also speaking, the Candidate of the National Rescue Movement (NRM) for Ebonyi South Senatorial District, Mr. Ibeabuchi Ajah, described the action of the EBSIEC during the council polls in the State as an aberration and a travesty to a democratic landscape.

He explained, “We are here in the Federal High Court against EBSIEC, stating that the way it conducted local government election is an aberration – a travesty to a democratic process.

“So, we sued to regularise the process, but today we didn’t see anybody, we didn’t see the judge, and we are at the Federal High Court stranded.

“The clerk said they will give us a date, to communicate with us, but truly, the process is an aberration to a democratic landscape.”

He, however, urged the public to rise to defend democracy, saying “those in authority should understand that power belongs to the people,” by not infringing on their rights through leadership imposition and high-handedness in things connected to them.