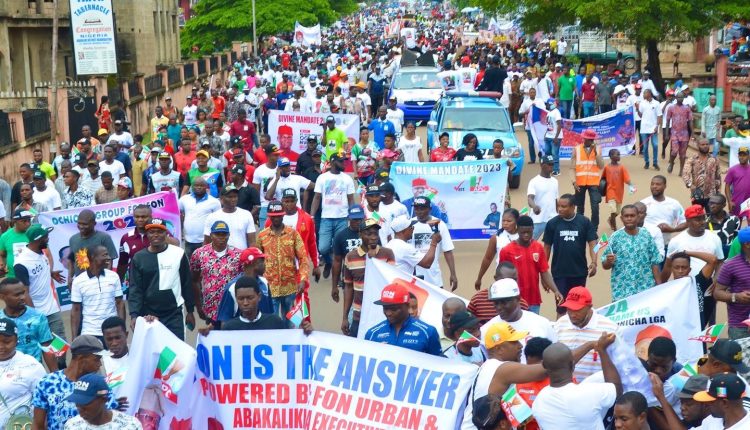 Last updated Dec 4, 2022
0 362
Share
A political youth movement has organized a rally in support of all the candidates  contesting for various positions, starting from Governorship to the House of Assembly in Ebonyi state, South-east Nigeria.
The youth movement known as Francis Ogbonna Nwifuru (FON) Youth Movement organized the rally to sensitize the people of Izzi Local Government Area of Ebonyi state.
The Chairman of Izzi Local Government Area, Mr. Stephen Nwankpa, thanked Chinedu Emerike, the State Coordinator of FON, for organizing the event in such a remarkable way.
“We are here to confirm and show commitment to our people our readiness to deliver on the mandate given to us by our people.
“You should vote for All Progressives Congress (APC) at all levels.
“Izzi people in Ebonyi State are known for peace and tranquility.
“We are not going to use violence to win election. I promise you the most peaceful election,” he said.
The Council Chairman also promised that medical services shall continue to be free, if the All Progressives Congress (APC)wins in the state.
“No Ebonyi woman will be held in the hospital after treatment because of outstanding bills,” he added.
The Francis Ogbonna Nwifuru (FON) Youth Movement Coordinator of Izzi Local Government, Mr. Okemini Felix, said the movement was going to ensure that “our people are properly oriented to vote effectively to elect all the APC Candidates at all levels.
“Vote for Ogbonna Nwifuru for Governor, Onyekachi Nwebonyi for Senate, Emmanuel Uguru for House of Representatives, and Godwin Agbiri for State House of Assembly,” he charged.
The Chairman of the rally, Mr. Monday Nkwede, said the people of the Area should give their full support to ensure that all the APC candidates emerge victorious in the forthcoming election.
On his part, the APC governorship candidate, Mr. Francis Nwifuru, represented by Fidelis Nwifuru solicited for the support of Ebonyi people.
The APC Youth Campaign Director-General, Mr. Uche Alega, said there will be rural integration and economic emancipation, if APC wins in the state.
Ebonyi stateFrancis Ogbonna Nwifuru (FON) Youth MovementThe All Progressives Congress (APC)