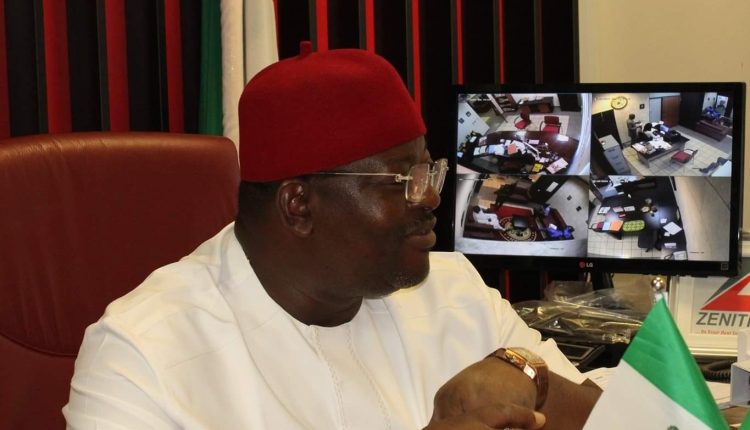 On Nov 6, 2022
0 425
Share
Ahead of the 2023 polls, a former  gubernatorial candidate under the platform of the People’s Democratic Party (PDP), Senator Obinna Ogba, has donated his campaign office to the PDP Presidential candidate, Atiku Abubakar, in Ebonyi State, South-east Nigeria.
Senator Obinna, a member representing Ebonyi Central Senatorial District disclosed this in Abakaliki, the State capital while briefing journalists on his position after losing his gubernatorial ticket legal battle to Ifeanyi Odii, the Ebonyi PDP gubernatorial candidate recently.
Fielding questions by journalists during the briefing, Senator Ogba disclosed that he joined the PDP in 1998 and up to date, he has never thought of leaving the party for any reason.
“I joined the PDP in 1998 and since then till today, I have not left the party, and I’m not ready to leave the party now.
“So, I’m still a member of the PDP and again for your information, I have willingly donated my campaign office to Atiku/Okowa presidential campaign council in Ebonyi State,” he said.
Senator Ogba had earlier stated that the outcome of the PDP gubernatorial primaries in the state was not the main issue in contention as far as the 2023 general elections was concerned.
He commended his supporters for the collective values and visions they shared with him to make Ebonyi people happier.
He commended his supporters, especially the PDP executives in the state, for their unwavering contributions and prayers for him to actualize his 2023 bid, which was later truncated in the law court.
He noted that even as the legal battle of the gubernatorial primary lasted in the state, his supporters had never for once failed him. He, however, commended the Nigerian Judiciary for its rulings, even though they were not in his favour.
“Thank you for your patience, prayers, good intentions and unwavering support.
“I will always be grateful to God Almighty that though the just concluded political differences met with legal tussle, it took our time but not our lives,”he added.
He further thanked God that upon the delayed ruling by the Supreme Court “no brutality or bloodshed was witnessed.”
CampaignEbonyi stateThe Peoples Democratic Party (PDP)