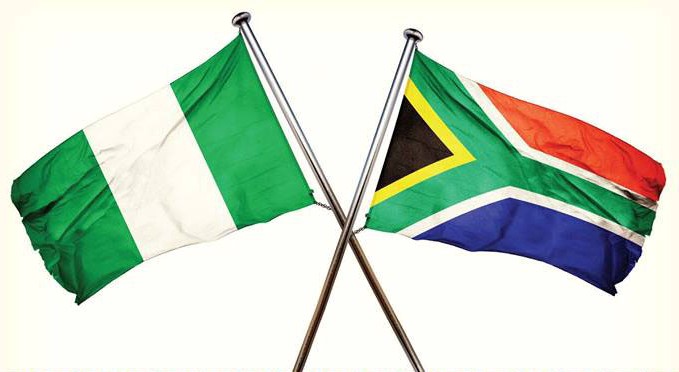 Nigeria accounts for 64% of South Africa’s trade in West Africa. The volume of trade between Nigeria and South Africa is well over five billion U.S. dollars with crude oil being the major commodity.

In the last two years, South Africa imported goods worth over three billion dollars from Nigeria showing how important Nigeria is to South Africa in trade and business transactions.

Recently, a stakeholders meeting was held in Lagos, Nigeria where participants called for the ease of visa restrictions between Nigeria and South Africa to improve bilateral relations between the two countries.

Relations between Nigeria and South Africa date back to February 21, 1994, when Abuja established formal diplomatic relations with Pretoria after the end of the apartheid regime. Before then, Nigeria was a member of the Front-line states in the struggle and fight against the repressive apartheid government in South Africa.

Nigeria regarded South Africa as part of its territory during the years of apartheid. As a result, Nigeria issued more than three hundred passports to South Africans seeking to travel abroad in those trying years.

Apart from the fact that Nigeria and South Africa are former British colonies with diplomatic missions in Abuja and Pretoria, both countries are members of the Commonwealth of Nations and the African Union, AU.

The two brotherly nations have helped to foster pan-African ideals by providing effective continental leadership. Nigeria and South Africa have also rallied other African and World leaders to restore peace and stability in some troubled African countries. For instance, they both championed the birth of the New Partnership for Africa’s Development, NEPAD, as well as the AU and also established a joint commission to facilitate and promote Africa’s renaissance.

However, several issues have continued to constrain relations between the two nations. Topmost is the case of xenophobic attacks targeting immigrants, particularly Nigerians and other African nationals in South Africa.

Following the xenophobic attacks of 2019, South Africa tendered an apology to Nigeria for attacks targeted at its citizens in the Southern African country. More than an apology though, political analysts believe that there should be increased efforts on the part of South African leaders to engage their youths in continuous, open, and constructive conversations on respecting humanity and standing against xenophobic attacks on fellow Africans.

Nigeria and South Africa share common goals of promoting African trade and have committed themselves to fast-tracking relations in foreign policy, culture, agriculture and health.

It will not be out of place, therefore, for both countries to implement a Visa on arrival policy arrangement similar to what Nigeria has with Kenya for ease of doing business.

Already, the e-Visa system is being implemented by the two countries. This system is expected to contribute to streamlining and modernizing the visa application process for travellers between Nigeria and South Africa.

As the largest economies in Africa, a lot of African countries are looking up to them for direction towards African integration and renaissance. They therefore cannot afford to falter. The diplomatic relations should as such be more robust than what it is today.

South Africans should also see Nigerians as their brothers and sisters and stop forthwith any form of Xenophobic attack on not just Nigerians, but any African National for that matter and encourage business relationships among African countries.