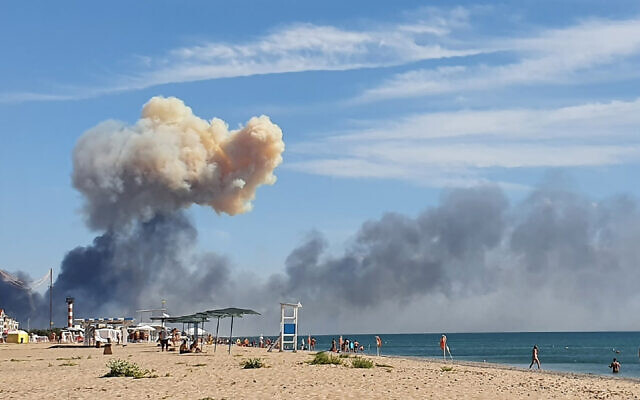 Reports say the blasts hit an ammunition depot at a military base in the north of the Crimean peninsula, disrupting trains and forcing the evacuation of 2,000 people from a village.

According to the reports, a second Russian military base in central Crimea was also engulfed in plumes of smoke.

The blasts and smoke followed last week’s explosions at a Russian military air base in western Crimea that destroyed eight warplanes.

Russia has blamed saboteurs for the explosions at the military base. Its defense ministry said its strategy was to destroy supply lines supporting Russia’s invasion.

As Ukraine considers a counter-offensive in the south, the explosions raised the prospect of new dynamics in the six-month-old war if Ukraine has the capability to strike deeper in Russian-occupied territory or if pro-Ukraine groups are having success with guerrilla-style attacks.

President Volodymyr Zelensky urged Ukrainians to steer clear of Russian military bases and ammunition stores and said the explosions could have various causes, including incompetence.

“But they all mean the same thing – the destruction of the occupiers’ logistics, their ammunition, military, and other equipment, and command posts, saves the lives of our people,” he said in an evening address.

The Crimean peninsula, which Russia annexed in 2014, is the main supply route for its forces in southern Ukraine and the base for its Black Sea fleet.