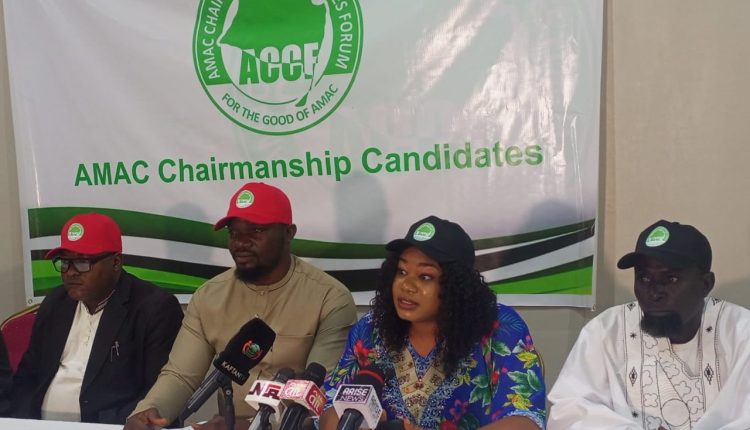 The Forum of Abuja Municipal Area Council Chairmanship Candidates, ACCF, has condemned the FCT Election Tribunal judgement, which sacked the incumbent Chairman, Hon. Christopher Zakka Maikalangu of the People’s Democratic Party, PDP from office and ordered that his challenger, Murtala Karshi of the All Progressive Congress, APC, be returned winner of the election.

Recall that Maikalangu had approached the same Tribunal and obtained a stay of execution notice pending final determination of his appeal.

The Forum, made up of those who contested and lost the chairmanship election in different political parties, has warned relevant stakeholders not to temper with the authentic INEC results which was announced in the presence of local and international observers, the media and their agents.

The Chairman of the Forum, Honourable Primacy Okadigbo, who addressed the conference, stated that because of their love for the Council, they were shocked by the sacking of the “rightful winner of the election, Hon. Christopher Zakka Maikalangu” in a process they all witnessed to be fair, free and credible.

According to him, “Having keenly studied the judgement, as candidates who were key players in the election, we are shocked at the judgement.

“Each of us seated here today has our own results signed by our agents and they tally completely with the results presented by INEC at the Tribunal.

“According to our result sheets, there were no cancellation of votes at the 12 poling units as claimed in the judgement of the tribunal.

“So where did the additional over 8000 votes that were added to the All Progressive Congress emanate from?”.

“Why was the authentic result of INEC that was presented to the Tribunal, which tallies with what each of us who contested the election was not used in giving the judgement?“, he added.

The Forum however noted that their objective was not to “Preempt outcome of the Appeal, but to do our moral duty as key participants in that election to speak out and let the world know about this injustice that was carried out at the tribunal”.

Okadigno therefore called on the INEC Chairman, Prof. Yakubu Mamoud, to also speak out, and warned that if the judgement was allowed to stand, it would serve as “an indictment on the independence and credibility of the Independent national electoral commission”.

BVAS Machine
He commended the successful use of the newly introduced BVAS machine in Anambra, Ekiti and Osun elections without any issue, and wondered why the case of the FCT would be different.

The Chairman of ACCF also called on the Inspector-General of Police, the FCT Commissioner of Police, the Commandant General of the NSCDC to investigate the results that was submitted at the Tribunal and punish those found guilty of lying under oath and presenting falsified results according to the law of the land.

He also enjoined the National Judicial Council to look into the Tribunal judgement and activities.

Also speaking, the candidate who contested on the platform of National Rescue Movement, NRM, Honourable Mina Horsfall who frowned at the judgement of the tribunal noted that if for any reason the result of the election for AMAC is tampered with, they will challenge the outcome.

She added that international communities and various civil societies organisations that monitored the election and declaration were satisfied with what they saw.

She enjoined all candidates that took part took part at the February 12th Area council election in AMAC to accept the outcome of the election and allow the winner concentrate on developmental projects that would better the lives of electorates and not to waste resource on Court cases.