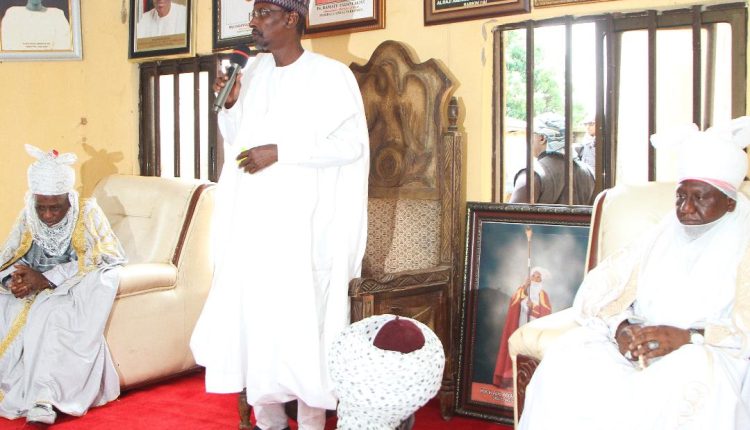 The Minister of the Nigerian Federal Capital Territory, FCT, Malam Muhammad Musa Bello has expressed his condolences to the people of Kwali Area Council, particularly the Pai Chiefdom over the death of their traditional ruler, HRH Alhaji Abdullahi Bala Ibrahim Pai.

The Minister who led a high-level delegation of top officials of the FCTA, Area Council chairmen, All Progressives Congress (APC) party chieftains and royal fathers in the FCT to the palace of the chief on a condolence visit, described the late traditional ruler as a peace-loving elder statesman and a father to all.

Reminiscing his time with the deceased, Malam Bello spoke in Hausa that his relationship with the late chief was harmonious and he was “one person who always made out time to attend any meeting called to deliberate on the security, growth and development of the FCT and the residents. He comes for all meetings even when he was ill”.

“For myself, the Ona of Abaji, the Sarkin Keffi who also led a delegation on this condolence visit and the entire people of Pai, this death is a great loss”, the Minister stated.

He also assured residents that the FCTA will continue to support Kwali Area Council, especially in its development agenda for the area.

The Ona of Abaji, HRH, Dr. Adamu Baba Yunusa while praying for the repose of the soul of the late traditional ruler, called on the people to emulate his good virtues of encouraging peaceful co-existence.

Earlier, the Minister and his delegation had visited the Kwali Area Council secretariat where he also condoled the Council Chairman Hon. Danladi Chiya and the people of Kwali over the death of the royal father.

He congratulated the chairman on his re-election for a second term in office while commending his effort at security and for bringing harmony between farmers and herders in the area.

According to him, “All the efforts you have been making to provide security in Kwali and by extension, the FCT, especially in terms of harmony between farmers and herders in your community is quite commendable”.