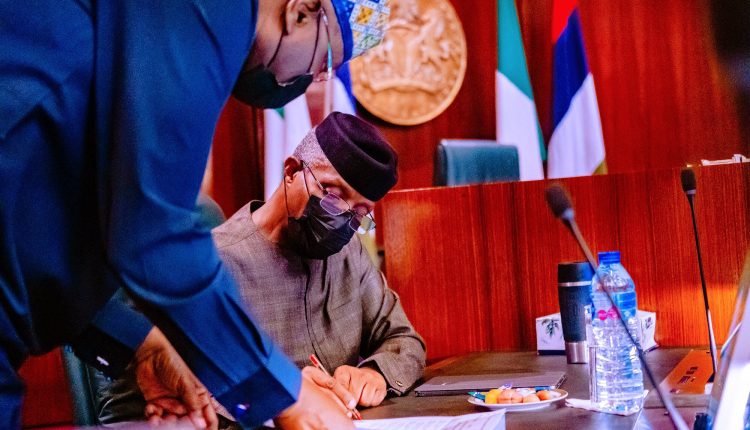 The Federal Executive Council has approved contracts totaling about N11.67billion for the Ministry of Power for the procurement of transmission sub-stations and transformers for the Transmission Company of Nigeria.

The approval was given at Wednesday’s meeting of the Council presided over by Vice President Yemi Osinbajo.

Minister of Power, Abubakar Aliyu, who briefed State House correspondents after the meeting, said that the first memo approved for the ministry was for the design, supply and installation of of 1/60MVA 132 33KV Transmission Sub-Station with associated 4/132 KV Line Bay Extension at Hong, Hong LGA in Adamawa State.

He said the approval was in favour of Messrs Associate Power Solution Engineering Limited in the sum of over N6.53billion.

He said that figure consisted of two components, explaining that one was for offshore, which amounted to $6.93million, while the onshore was N3.34billion at the Central Bank of Nigeria, CBN, prevailing exchange rate and 7.5% VAT.

The delivery period of the contract is 24 months.

“This seeks to raise the capacity of the supply around that area and it’s going to affect so many towns and villages.  It is a very important LG headquarters around that area.

“It’s going to affect Song, which is a local government headquarters in Adamawa State; Gombi is another; Garkida Town, then Hong, a town along that road; then Mubi, Wukpa, Michika, Madagali.

“There is an existing 132 that passes through this area.  So, what we are doing now is to drop our substation there.

“The hope is that by the time all these interventions we are making on the grid reaches up to 11, 000, that area will be able to withstand and take it up.”

Aliyu said that second contract approved for the ministry was to procure power transformers and associated spare parts for the Transmission Company of Nigeria, TCN, which would be deployed to six locations.

“One is to Aiyede in Oyo state to Messrs T and D technologies limited: offshore component is $1.8 million, the onshore is N98 million.

“The second one is in Gusau in Zamfara State.  The project is awarded to Messrs  Basharri limited..

“The third one is Kankia in Katsina state, which is to enjoy the same project to be supplied by Messrs Farmamade Energy Limited.

“The next one is Minna, Niger State is also to enjoy some project to Messrs Crossworld Global Technology Limited. Then the fifth one is to Okearo in Ogun to enjoy the same transformer.

“The sixth one is in Damaturu, Yobe State. This one is very peculiar because as you may be aware, for over one year, Maiduguri has not been enjoying full electricity.

“We restored that around three to four months or thereabout. So they’re enjoying but very little, by the time electricity reaches Maiduguri, it will not drop to six or seven megawatts because of losses along the way.

“As you are also aware, the 330 takes power to Maiduguri was vandalized by insurgents, and we tried a number of times to restore it, they will go back and pull down the towers.

“So, we now decided, in the main time to take electricity through the 33 KVA which they are enjoying but not as they may like it to be. It’s being rationed around the time.”

Aliyu said that the ministry was procuring another 33 double circuit new one to Maiduguri along the same route, adding that the idea was to ensure that even if someone tampers with it, it would be easy to restore within a day or two, unlike the bigger 330, which takes weeks or months to restore because it’s in the bush.

According to him the contractor has been returned to restore the main 330 that was vandalized some time back.

He said that project seeks to boost the capacity of the Damaturu Sub-station in order to have enough electricity for the area and its environs as well as take some to Maiduguri.

Aliyu explained that the dollar component of the contracts totaled about $22.7million while the naira component was N5.14billion.