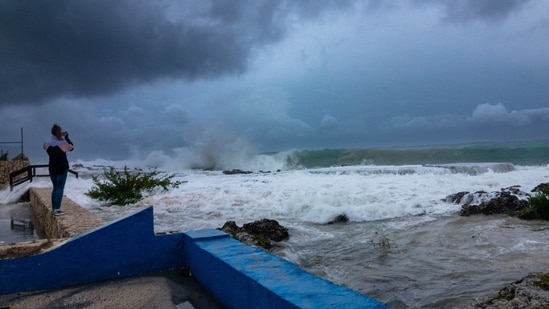 Florida has issued evacuation orders to more than 2.5 million residents of Florida’s Gulf Coast as Hurricane Ian draws near, threatening to bring a deadly storm surge and more than a foot of rain to some areas.

There were warnings that the sprawling storm is on track to make landfall as a Category 3 or Category 4 hurricane on Wednesday evening somewhere along Florida’s Gulf Coast.

A Category 3 storm on the five-step Saffir-Simpson scale carries maximum sustained winds of up to 129 miles per hour (208 km per hour).

Residents of Florida’s Gulf Coast boarded up homes, packed up their vehicles and headed for higher ground on Tuesday.

Ian churned across the southeastern edge of the Gulf of Mexico headed for Florida after slamming into Cuba earlier in the day, leaving the entire country without power, forcing mass evacuations and swamping fishing villages.

Ian was most likely to come ashore south of Tampa near Sarasota, the National Hurricane Center (NHC) said.

That region – home to miles of sandy beaches, scores of resort hotels and numerous mobile home parks – is a favorite with retirees and vacationers alike.

While predictions remained imprecise for where the storm would come ashore, “the impacts are going to be far, far broader than just where the eye of the storm happens to make landfall,” Governor Ron DeSantis said.

DeSantis warned of the potential for devastating Hurricane Harvey-like flooding that struck the Houston area in 2017, the result of a slow-moving storm piling up high water.

Parts of central Florida could see as much as 2 feet (0.6 meters) of rain from Ian, according to the National Weather Service.

The NHC also issued extensive storm surge warnings for about half of western Florida’s shoreline, with predictions of life-threatening coastal flooding up to 12 feet from wind-driven high surf.

“The time to evacuate is now. Get on the road,” Guthrie said.

To ease traffic congestion, authorities suspended toll collections along major highways in central Florida, the Tampa Bay area and the interstate stretch across the Everglades known as Alligator Alley.

If Ian strikes Tampa, it would be the first hurricane to make landfall in the area since the Tarpon Springs storm in 1921.

It also may prove one of the costliest as the latest simulations projected storm-related damages ranging from $38 billion to more than $60 billion, Enki Research said on Tuesday.