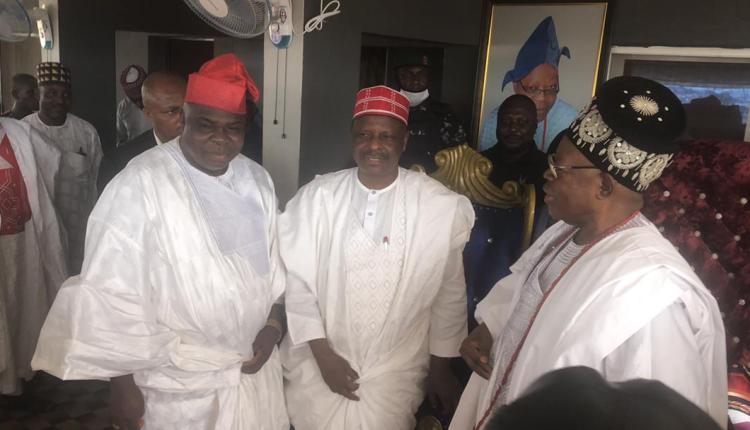 Kwankwanso, a presidential aspirant on the platform of the New Nigerian National Party (NNPP), noted Oba Balogun’s contributions to the country’s political development since his entry into politics in 1983 when the monarch contested as governor in the old Oyo State, under the banner of the defunct Nigeria People’s Party (NPP), after defecting from the People’s Redemption Party (PRP).

He noted: “The coming into existence of the NNPP, which is an off-shoot of the old NPP during the reign of Your Imperial Majesty, is a divine arrangement.

“Our party is imbued with ideas and people to drive the agenda for a new Nigeria where there would be life abundance for all, irrespective of status, religion, race or creed.”

The Kano-born Senator and two-term governor of Kano State, however, called on Nigerians to take seriously the issue of registration and collection of the Permanent Voter Card (PVC) with which they would cast their votes for the party when the election comes, adding, “the expected change can only be effected through our votes which our PVCs would enable us to do.”

It was an expression of nostalgic feelings for both the politician and the monarch as they recalled the memories of past activities.

Oba Balogun, who once worked as a Research Fellow at the Ahmadu Bello University (ABU), Zaria and served as a Director of Kano State-owned Triumph Newspaper, told his guest of his close relationship with the late Alhaji Aminu Kano, late Alhaji Abubakar Rimi and late Alhaji Balarabe Musa.

The late Aminu Kano founded the PRP, under which both late Rimi and Musa won elections as governors of both Kano and Kaduna states, respectively, and it was through the same party, the Olubadan cut his political teeth.

Recalling that he had always been very close to the trio of Kano, Rimi and Musa right from his studentship days in the United Kingdom.

The monarch said the presidential aspirant was very much at home as he prayed for his success both at his party’s primaries and the main elections in 2023.

While reiterating the importance of PVC, the party’s governorship aspirant in the state, Popoola Olukayode Joseph (POJ), said: “Everybody is quite aware of what is going on in the state that doesn’t make people happy. We want peace in the state, which our party would pursue.

“To realise that we need the people’s votes which only the PVC can guarantee.”