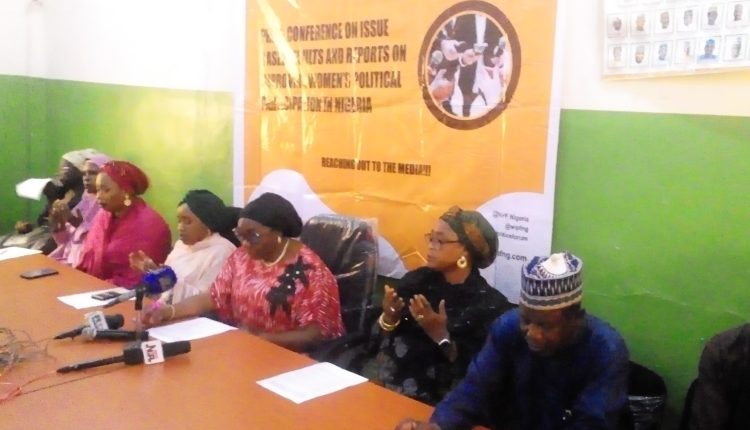 A Non Governmental Organisation, Women in Politics Forum, WIPF has decried low participations of women in leadership, elective positions and governance, despite advocacies and proposal by civil society organisations  in the country.

According to her, despite policies and legislations by government, Independent National Electoral Commission, released final lists of aspirants vying for different positions, but only 2.77% represent women candidates for the presidential seat with no party fielding a female as the vice presidential candidate.

READ ALSO: 2023: Anambra Labour Party Candidate advocates women inclusion in politics
” furthermore, for the Senate, out of 1,101 candidates vying for 109 Senatorial seats, 92 are women which represent only 8.35%.

” While 288 women are contesting for house of representatives out of 3,122 candidates also represent 9.2%.

” Cumulatively, there are 381 women among the total of 4, 259 contestants for presidency and national assembly seats which is worrisome for Nigerian women,” she stated.

She however lamented that the situation in Sokoto State is worrisome as in 2019 no woman was elected at national or state house of assembly.

” there seems to be a ray of hope for Sokoto women to be represented at the national and state assembly with 5 as candidates to the house of representatives though none is from the two major political parties”.

National Progress
Barrister Ifendu urged the government and other relevant stakeholders to take necessary steps to ensure women participation in politics for national progress and development.

” What this means therefore is that as Nigeria prepares for transition in to another face of democracy, these stakeholders who are mostly agencies of government be it the legislative, executive or judiciary arm, civil society organizations have an important role to play in ensuring that there is an increased in number of elected and appointed women,” she added.

Barrister Ifendu also urged the Executive arm of government to ensure compliance with the minimum 35% affirmative action in to the public offices, in conformity with the National Gender Policy and Judgement of federal high court.

Violence-Free Election
Ifendu also employ security agencies to be more proactive to ensure that campaigns and elections are violence free across the country.

The Forum President however called on women to ensure they collect their Permanent Voter’s Card and come out en mass and vote, support women’s agenda across the country for a better Nigeria.