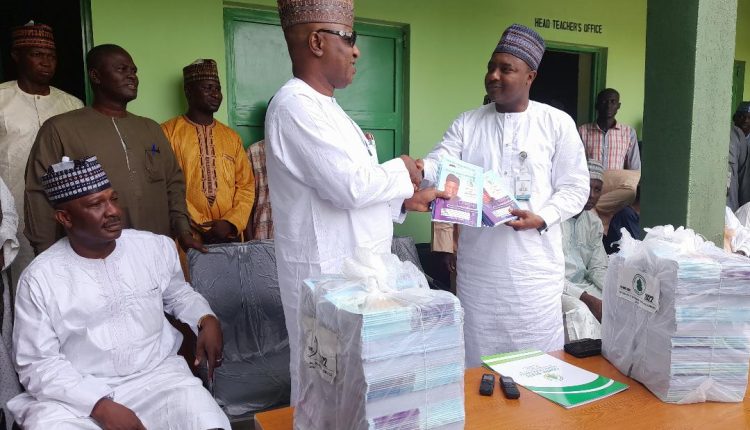 The Gombe State Board of Internal Revenue Service has donated 10, 000 exercise books to the Alabura Model School, a school newly established in the only remaining ward in the state without a single school.

The school with an estimated population of 900 students in the Primary and Junior Secondary schools combined, like some schools in some parts of the country, faces low attendance, despite many pupils being admitted into the school, due to lack of uniforms, books and levy for the Parent-Teacher-Association.

The Executive Chairman of the Board, Mr Abubakar Tata, said the gesture was part of the innovation, through the Tax-for-Service initiative, which was aimed at provoking tax compliance paying entities to continue to pay more. 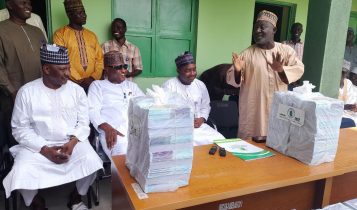 “We believe it is part of our responsibility to do it, it’s part of the responsibility of the government to do it and those people paying for taxes and levies will have the confidence to pay more so that we can do more.“

He said the Alabura Model School was selected because it was in his domain and he knew their needs very well to have to intervene.

“And specifically, for the choice of this school, they say charity begins at home, I was borne and brought up here, I have seen a lot of families who are unable to purchase exercise books, uniforms, even the payment of PTA. And that is why we chose this school to actually start this particular programme,” Mr Tata said.

He said similar gestures would be extended to other Senatorial districts in the state within the coming weeks.

The Executive Chairman announced that his foundation, the Abubakar Inuwa Tata Foundation, was from now henceforth, going to pay the Parent-Teacher-Association Levey for the 900 pupils in the school, which is the only fee that the children pay, but most parents hardly afford. 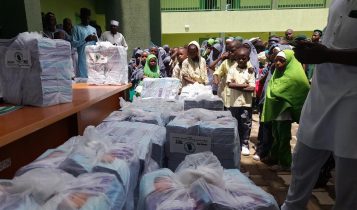 “What I did was to request for information from SUBEB, SUBEB gave us a total of 900 pupils, including the junior secondary school and as long as those 900 pupils are in this school, as long as I have breathe, they are not going to pay PTA. This is a promise I am making and on this we are going to ask for accountability of those funds. We are going to credit this school with the amount at the beginning of every year, so that they will come to school first term, 2nd term and 3rd term without paying a penny, as far as PTA is concerned.

“We realised that a lot of parents have no money to pay for PTA and as such their children will stay at home,” Mr Tata explained.

He called on well-meaning individuals and corporate Organisations to equally step in to help the less privileged to contribute their bid to the development of humanity, without necessarily having so much as a trailer load of wealth to do so. 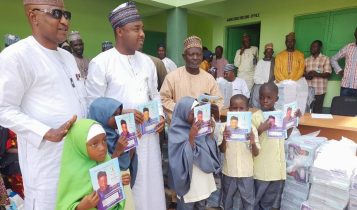 Mr Tata said a lot of people could afford to pay for two or more pupils, the sum of only N300 per child, sew uniforms for some or donate other useful school materials for the benefit of the less privileged in the state.

The Chairman of the Gombe State Universal Basic Education Board, Mr Babajai Babadidi, who was represented by one of the officials, Mr Sani Sabo, said because many parents could not afford to sponsor their children to school and government alone could not carry the responsibility, the intervention by the Gombe State International Revenue Service and the Chairman also, will go a long way in making a lot of difference.

Mr Sabo also called on critical stakeholders, such as construction companies, the other corporate bodies to come and partner with the government to support the educational development in the state.

He said there were many gaps to be filled, the majority of which is poverty, which had been hindering the enrolment of children into schools adding that the Governor Muhammadu Yahaya led Administration had within the span of three years, constructed and renovated 1, 327 classrooms, but that more was needed in that regard. 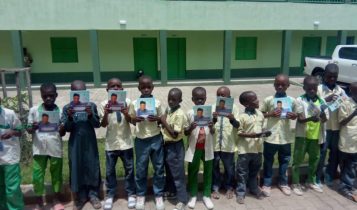 “Corporate Organisations should intervene by providing textbooks, writing materials, uniforms, desks and many others.

“We have a lot of challenges, though the government is addressing them one by one, but we cannot take care of them 100% in one time. So, the other entities should join hands with the government and donate so that we will be able to have a Gombe State, where each and every child will read and write,” Mr Sabo said.