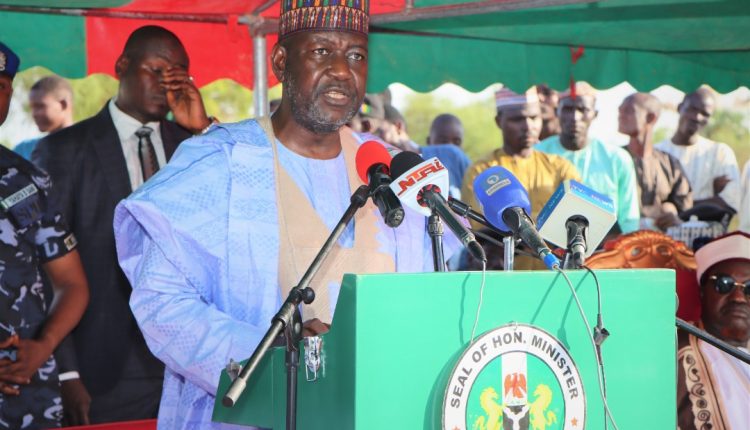 Nigeria’s President, Muhamadu Buhari says the commitment of his administration in infrastructure development across the nation is already yielding results.

President Buhari who was represented by Nigeria’s Minister of Power, Abubakar Aliyu, stated this during the official commissioning and handover of the completed section I phase II and section II phase I of the Nguru-Gashua-Bayamari road, in Gashua, Yobe State, north-east Nigeria.

#FGAtWORK… His Excellency the President, Federal Republic of Nigeria represented by the Honourable Minister of Power, Engr Abubakar D. Aliyu at the The Official Commissioning and Handover of Nguru – Gashua – Bayamari Road in Yobe State on the 2nd July, 2022 pic.twitter.com/h5pURsdTvU

“Our commitment to improving road transport infrastructure, our determination to improve the ease of doing business, create jobs and prosperity to lift people out of poverty brings us here today because the results of our investment are manifesting,” he said.

Accordingly, he explained that the road has been built to the highest quality of design and workmanship and if well used and not abused, it should last for the designed service life.

While assuring Nigerians about the desire of his administration to complete all ongoing projects, President Buhari said: “I can confidently say that as we enter the final lap of the tenure of the Buhari administration we are also entering a season of completion and delivery of projects.

“Now that we have this new and well-built road, we have duties to ourselves and to other road users and one of those duties is to ensure that we drive in accordance with the law as stipulated in the Highway Code,” he stressed.

The Nigerian leader, listed the road abuses to include: overloading of vehicles which accelerates pavement damage; spilling of petroleum products, which dissolves all the components and allows water to penetrate and converting the road shoulders to permanent parking places, that brings the onset of road failure from the shoulder.

“Nigerian citizens should do their best to avoid these practices and to report them when they occur and also act in a lawful manner to stop them,” he said.

Earlier in his remarks, the Minister of Works and Housing, Babatunde Fashola represented by the Director Highways, North-Eastern region of the country, Celestine Shawusu, said that the projects represent major investment in road Transport infrastructure, which was a commitment of the Buhari Administration as a driver for economic growth and prosperity.

Remarks by The Honourable Minister of Works and Housing, Mr Babatunde Fashola, SAN represented by the Director Highways North East Celestine Shawusu at The Project Completion and Hand Over on Saturday 2nd July, 2022 at Gashua Town, Yobe State https://t.co/4wXWGPsONV pic.twitter.com/ZpDT0GXBuN

He explained that the projects were visible and incontrovertible assets in proof of what Nigeria’s resources are invested in, from a combination of Nigeria’s earned resources and borrowings.

Fashola also acknowledged and commended the commitment of the President and his Vice, the professionalism of staff of the Ministry in the delivering of the projects and the support of Ministers in the Federal Executive Council and the members of the National Assembly, especially the Chairmen of the Senate and House Committees on Works in the 8th and 9th Assembly for their support.

The Permanent Secretary of the Ministry, Bashir Nura-Alkali, represented by the Yobe State Federal Controller of Works, O.B. Akinmade, said that the administration of President Muhamadu Buhari has focused it’s attention on the completion of several on-going projects to stimulate economic development, create jobs and promote local content.

Welcome Address by The Permanent Secretary, Federal Ministry Of Works And Housing, Bashir Nura Alkali, FCA, FCTI Represented by the Controller Yobe State, Engr O. B. Akinmade at The Commissioning of The Construction of Nguru-Gashua-Bayamari…https://t.co/7AVQmWyKUP pic.twitter.com/YatocgYOPh

He explained that it was part of the developmental agenda of the administration in addressing road infrastructural development of Nigeria.

“The focus is to link the major arterial roads to refineries, ports, tertiary institution s and high volume commercial centers with a view to reducing travel times, vehicle maintenance costs, safety and security of commuters,” he added.

Yobe State Governor, Mai Mala Buni stated that the project was both historic and important to the State.

He noted that after several years of neglect by previous governments, the Buhari’s administration has been able to rehabilitate the road for use.

He said: “The importance of the road to the socio-economic development cannot be overemphasized.”