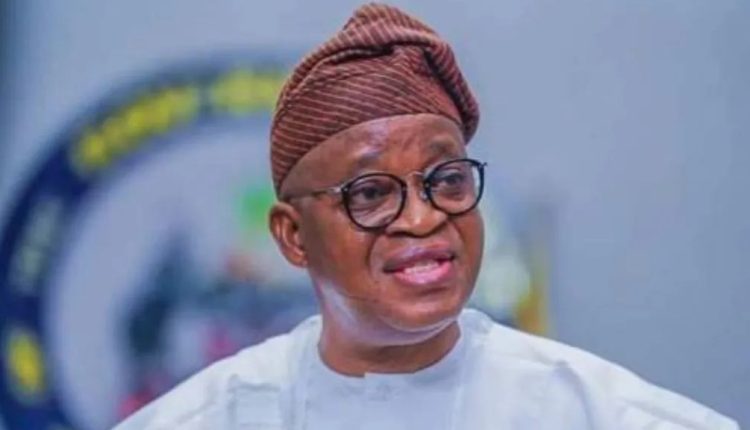 Osun state Governor, Adegboyega Oyetola, has inaugurated the Governing Council of the University of Ilesa, in an effort to ensure a quick take-off of academic activities at the newly approved and licensed University.

The Governor charged members of the Council on fairness and pro-activeness towards ensuring the financial sustainability of the institution.

Inaugurating members of the Governing Council at the State Executive Council Lounge, Osogbo, Governor Oyetola, said the idea of the new University had become necessary to further expand access to qualitative education, among other opportunities, for the young population.

“As a State known for excellence in all spheres, we envision a citadel of excellence that will enter the nation’s educational space as a leader in the university’s tripartite mandate of teaching, research and community service and provide competitive graduates that will transform the State’s economy in line with our Development Agenda and rule their world.

“This is the profile of the University we have invited your Eminences into, believing that your individual records of distinction will deliver the excellence and internationalization that we envision.

“Just as our administration has demonstrated that delivering service in a depressed economy is doable, we charge you to demonstrate to the world that academic excellence is possible”, the governor added.

The immediate past Minister of Health and Former Vice-Chancellor, University of Ibadan, Prof. Isaac Adewole chairs the Council.

Others are: Professor Oluyemisi Obilade – Former Vice Chancellor, Tai Solarin University of Education; Mr. Rasheed Sarumi-GMD, SaroAfrica; Representative of the Executive Secretary, National Universities Commission (NUC); Permanent Secretary, Ministry of Finance, Osun State; Permanent Secretary, Ministry of Education, Osun State; Statutory internal members from the University as provided for in the Establishment Law, who would be added upon the take-off of the University; Prof. Kayode Ijaduola and Dr. Dada who will serve as the Council’s Secretary.

Recall that the administration of Governor Oyetola had earlier approached the State House of Assembly for the upgrade of Osun State College of Education, Ilesa to a full-fledged university after which it was approved by the National Universities Commission (NUC).

Responding on behalf of members of the Governing Council, Chief Akinwande Akinola, assured of their readiness to hit the ground running.

“It is a great honour that has been bestowed on all of us to be part of the pioneer Governing Council of this great University.

“There’s is no doubt in the fact that Mr. Governor’s name will be published in gold. The upgrade of this university took us 30 years and nobody will forget what Mr. Governor has bestowed on us, and everybody is happy on this gesture.

“It will be forever written that during Oyetola’s reign, the College was upgraded. You have given us the mandate which we will deliver to the best of our ability and when you hear of the university in five years’ time, you will be happy. The university will continue to shine,” he said.