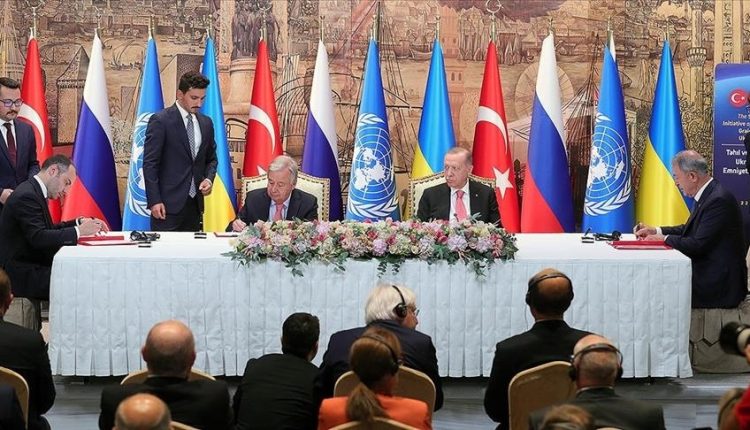 The United Nations, Turkey and Ukraine have pressed ahead with the implementation of the Black Sea grain deal despite Russia’s withdrawal from the pact.

The UN said in a statement that it has agreed with Ukraine and Turkey on a movement plan for 16 vessels on Monday – 12 outbound and 4 inbounds.

It said the Russian officials at the JCC had been told about the plan, along with the intention to inspect 40 outbound vessels on Monday.

The UN noted that all participants coordinate with their respective military and other relevant authorities to ensure the safe passage of commercial vessels under the deal.

Under the deal, a Joint Coordination Centre (JCC) – made up of U.N., Turkish, Russian and Ukrainian officials – agrees on the movement of ships and inspects the vessels.

During Sunday’s session among grain deal delegations, Russian officials said Moscow will continue the dialogue with the United Nations and the Turkish delegation on pressing issues, the U.N. said in its statement.

But there was no Russian reaction in response to Monday’s transit plan.

Turkish Defence Minister Hulusi Akar was in contact with his Russian and Ukrainian counterparts to try and salvage the agreement and had asked the parties to avoid any provocation, the Turkish defence ministry said.

Russia suspended its participation in the Black Sea deal for an “indefinite term”, cutting shipments from one of the world’s top grain exporters because it said it could not “guarantee the safety of civilian ships” travelling under the pact after an attack on its Black Sea fleet.

The move has sparked an outcry from Ukraine, NATO, the European Union and the United States, while the United Nations and Turkey, two main brokers of the July deal, scrambled on Sunday to save it.

The grain deal had restarted shipments from Ukraine, allowing sales on world markets, targeting the pre-war level of 5 million metric tonnes exported from Ukraine each month.

The deal ensured safe passage in and out of Odesa and two other Ukrainian ports.

But ahead of its November 19 expiry, Russia had said that there were serious problems with it and Ukraine complained that Moscow had blocked almost 200 ships from picking up grain cargoes.

Ukrainian President Volodymyr Zelenskiy accused Russia of wanting to escalate the crisis, saying 218 ships were blocked and waiting to either carry food or enter Ukrainian ports.

“We are ready to release this ship into the sea,” he said, but like other ships with agricultural products, it was being forced to wait, “because Russia is blackmailing the world with hunger,” he said.