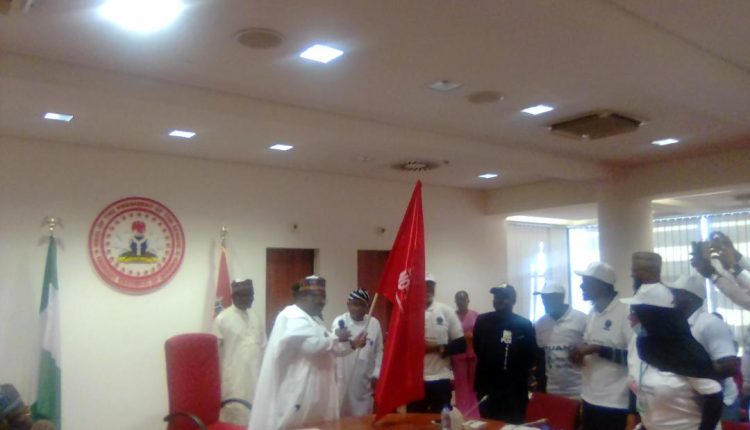 An electoral observer group in Nigeria, known as the Polling Unit Ambassadors of Nigeria, PUAN, has taken sensitisation and awareness Campaign against electoral inducement of voters through vote buying to the Nigerian National Assembly and the Independent National Electoral Commission INEC to caution Nigerians on the dangers of vote buying.

The Polling Unit Ambassadors of Nigeria, PUAN, took the campaign to the Independent National Electoral Commission, INEC’s Headquarters and the Nigerian National Assembly in Abuja Nigeria’s Capital to present a flag to the President of the Senate Dr. Ahmed Lawan, and the Chairman of the Independent National Electoral Commission, INEC, Professor Mahmood Yakubu to issue to those who are involved in the inducement of voters.

The President of the Nigerian Senate Senator Ahmed Lawan who received the electoral Ambassadors wave the flag against voters’ inducement and called on all Nigerians especially the Youth to shun vote buying or selling of votes during elections but should vote according to their conscience.

Dr. Lawan also said both vote buying and vote selling is criminal according to the 2022 electoral acts.

In his remarks the Ambassador General of Polling Unit Ambassadors of Nigeria, PUAN, Mr. Suleiman Dabas charged politicians to shun voters’ inducement by paying them to sell their votes against their conscious during elections.

Mr. Dabas also called on voters not to sell their votes but to vote for the candidate of their choice during elections.

Earlier at the Independent National Electoral Commission, INEC, Professor Mahmood affirms the Commission’s commitment towards collaborating with security agencies in the country to arrest and prosecute both givers and receivers of any form of inducement either by cash or kind in the forthcoming 2023 General Election.

The Commission made this known while receiving a red flag notice against vote buying and vote selling from the Polling unit Ambassadors of Nigeria, PUAN, at the INEC office.

A senior officer of the Commission’s voters educations department, Mr. Daniel Mabadeje who represented the Chairman of the Commission noted that the commission has come up with strategies and techniques to ensure that people do not enter the voting compartment with mobile phones that can take pictures during elections.

He also stressed the need for Nigeria to establish the commission of an electoral offence to collaborate with INEC checkmating electoral fraud and other related crimes.