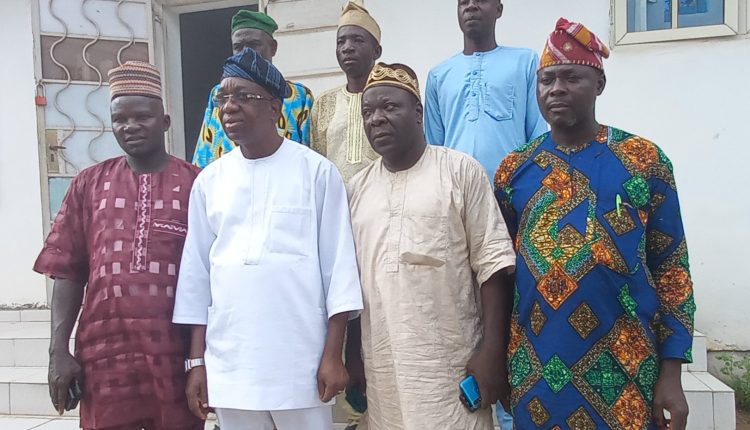 The umbrella body of all socio cultural groups, societies, associations and clubs of Igboho extraction, both home and abroad, Ifelodun Omo Igboho, has assured the Oyo State Deputy Governor, Rauf Olaniyan, of support in whatever political decision he takes.

The National President of Ifelodun Omo Igboho, Mr Badmus Imran Oloyoyo, who led other leaders of the group on a solidarity visit to Olaniyan at his private office, Ojoo, Ibadan, disclosed that Igboho indigenes are proud of Olaniyan as a worthy ambassador of the town and the state as a whole, due to his antecedents.

Oloyoyo stated: “There is no other thing for all people in Igboho and indigenes than to follow our Baba to wherever he is going. He’s our father and also our son in Igboho. We must not underate or underscore him because he’s our own.

“We heard that he has joined another political party, which is the All Progressives Congress (APC). As sons and kinsmen, we are here to show our love and support that we are behind him and in support of his political move and we will follow him,” he affirmed.

Reacting to another group in the town, which earlier claimed it was unaware of Olaniyan’s decision to dump the ruling People’s Democratic Party (PDP) for the APC, the leader of the groups said, as the apex socio-cultural organ in the land and region, the decision of the Ifelodun Omo Igboho overrides whatever anyone else might have said on the issue.

He noted: “If some people are saying something different from what we said here, we don’t know the kind of position those ones hold in the community. The position we are holding as the head and representatives of sons and daughters of Igboho land is above whatever positions they are holding. And we are saying categorically that we are following the Deputy Governor of Oyo State to wherever he’s going.”

Oloyoyo urged all sons and daughters of Igboho to support and follow the Deputy Governor to wherever he goes.

Responding to the visit, Olaniyan commended the groups for the show of solidarity, saying Igboho people are very objective and he has their full support because he is very relevant in his hometown due to the impact he has made on the communities, contrary to what some people believe.

Olaniyan stated: “These people are the core body of Igboho. We call them Ifelodun Omo Igboho, home and abroad. That’s the chairman, the vice chairman, the secretary and treasurer. Leaders of other areas are also here to pledge their loyalty and support.

“I asked them if they see anything wrong in me dumping PDP for APC, they said even if it’s not APC, they will follow me wherever I go because they know the impact I have made on them,” he declared.

Olaniyan further urged sons and daughters of Igboho to continue to be good ambassadors of the town, as he is, and not lose their heads when others are losing theirs, as that is what Igboho is known for.