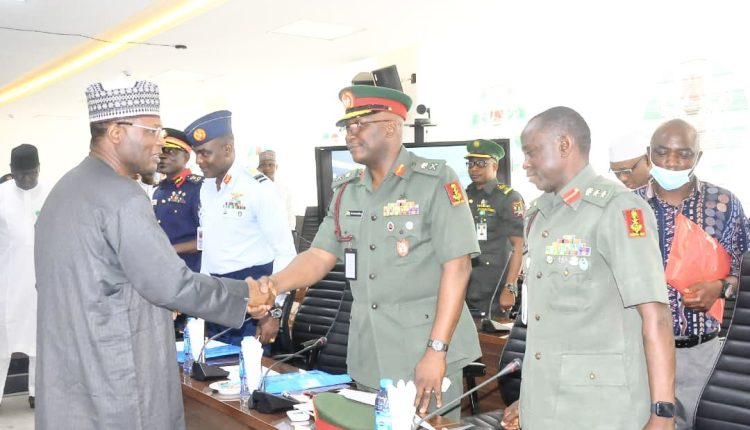 The Independent National Electoral Commission (INEC) has complained about the resurgence of vote-buying as witnessed during the just concluded Ekiti Governorship Election.

Speaking at a special meeting of the Inter-Agency Consultative Committee on Election Security (ICCES) held in Abuja, the INEC Chairman, Prof. Mahmood Yakubu, admitted that vote-buying remains a significant concern to the Commission.

However, he commended the anti-corruption and security agencies for promptly apprehending some perpetrators of what he described as a “brazen assault” on Nigeria’s democracy during the election.

He said: “We are working with the Economic and Financial Crimes Commission (EFCC) to ensure the prosecution of persons arrested in the recent Ekiti governorship election.

“Action will commence as soon as the EFCC completes its investigation. I appeal to all security agencies to continue to join hands with the Commission to tackle this menace.”

On the Osun Governorship election scheduled for Saturday 16th July, Prof. Yakubu says the Commission is closely watching the security situation in the State, following the reported brawling in some places and the recent disruption of the collection of Permanent Voters’ Cards (PVCs) at two Wards.

He explained: “In one recent example, the collection of Permanent Voters Cards (PVCs) was disrupted in Erin Oke and Erin Ijesha Wards of Oriade Local Government Area, resulting in the loss of 46 PVCs.

“While the matter is being investigated by the police, the collection of PVCs for the affected Wards is now taking place in the INEC office in Ijebu-Jesha.”

He said the State office promptly compiled the Voter Identification Numbers (VINs) of the lost PVCs after the attack, paving the way for the Commission to reprint the cards for the affected voters quickly.

Prof Yakubu assured all valid registrants in Osun State: “no one will be disenfranchised on account of such incident.”

The INEC Chairman also declared that any attempt by anyone to vote using another person’s PVC would amount to an effort in futility.

He said the Bimodal Voter Accreditation System’s (BVAS) biometric capabilities would expose such fraud. They would diligently prosecute persons apprehended under the law.

On the Commission’s readiness for the Osun State Governorship election, the INEC Chairman said: “all the major activities that are supposed to be carried out at this stage have been successfully undertaken.

“The Commission is deploying a readiness assessment team to Osun State next week to assess our preparations for the elections.

“We will visit some of our Local Government offices in the State, hold meetings with our staff, brief the Council of Traditional rulers to solicit the support of their Royal Majesties for peaceful elections, and meet with the security agencies and transporters.

“We will also observe the mock accreditation of voters in some Polling Units across the three Senatorial Districts of the State to test the functionality of the Bimodal Voter Accreditation System (BVAS).

“A few days to the election, we will return to Osun State to meet with the stakeholders and for the signing of the Peace Accord by political parties and candidates under the auspices of the National Peace Committee.”

Prof. Yakubu assured all Nigerians that applied for the Certified True Copies (CTCs) of documents arising from the recent party congresses, primaries, and nomination of candidates that all requests are being attended to expeditiously despite the enormous quantities of documents involved.

He said: “Nigerian elections, especially the conduct of primaries for the nomination of candidates by political parties, is one of the most litigated in the world.

“Indeed, there are now far more cases challenging the breach of internal democracy within political parties than those involving the conduct of the main elections by INEC.”

In his first assessment of the Ekiti Governorship election, Prof. Yakubu described the synergy between the Commission and security agencies during the election as “seamless,” paving the way for a successful outing.

He continued: “Security was well-coordinated, the election was peaceful, and results were transmitted from the Polling Units and collated at the various collation centres in record time.

“I must, on behalf of the Commission, convey our appreciation to all members of ICCES for the success of the election. We must continue to build on the success of the Ekiti experience to ensure improved performance in subsequent elections, including the 2023 General Election.”

NSA’SPEAKS ON THE CONCLUDED EKITI ELECTION

The Co-Chairman of ICCES and National Security Adviser (NSA), Major General Babagana Monguno (rtd), noted that “records from the conduct of the last Ekiti State Governorship election showed an impressive performance by INEC and the ICCES member agencies. No major incident of security concern was recorded during and after the election.”

Represented by Mr. Sanusi Galadima, the NSA maintained that more needs to be done in an enlightenment campaign to encourage voters to come out and cast their votes on the day of the election. According to him, “this is because of the low turnout recorded during the election compared to the total number of registered voters in the State.”

The NSA called on INEC to re-double its voter education and enlightenment efforts ahead of the Osun State governorship and the forthcoming general elections in 2023.

He also urged members of ICCES “to build on the successes recorded in the Ekiti election, as some disgruntled politicians may attempt to sabotage the process for their selfish gains through vote-buying and other forms of voter inducement and political thuggery.”

MFM Becomes First Team To Be Relegated From NPFL